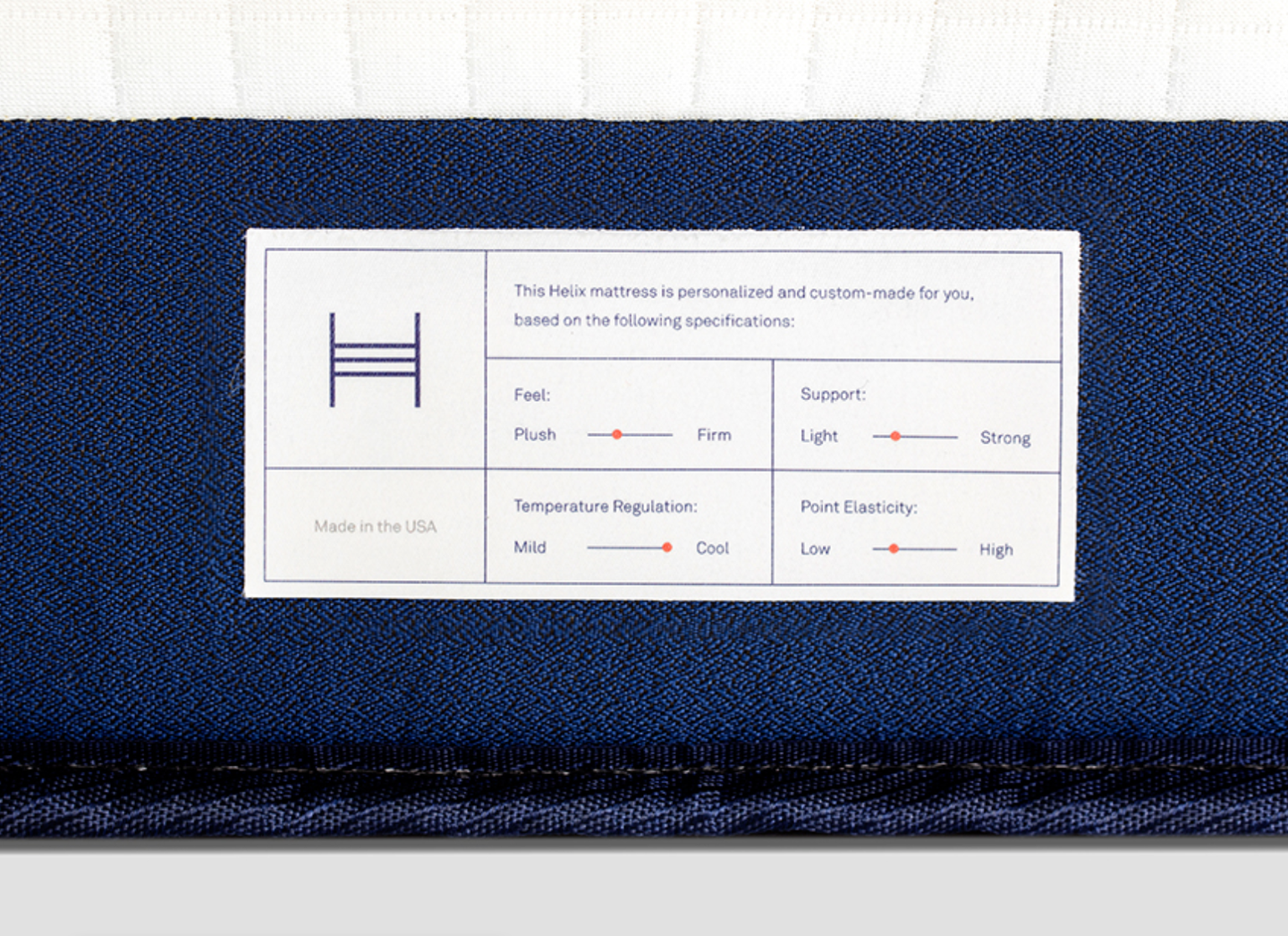 Helix Sleep customizes your mattress to account for how you sleep, your body type and more. Here’s how it compared to our old mattress.

We spend a third of our lives sleeping. That’s a truism we all accept—and neglect. The fact is, few us are geting the right kind of sleep—quality, deep sleep that repairs bone and muscle, boosts the immune system, and ensures we wake up energized.

Plenty of modern mattress-makers like Casper and Leesa offer to get us there by promising us the perfect mattress. But bed startup Helix Sleep says no such straight-from-the-factory mattress exists or will ever exist. Their counteroffer: a bed that you can customize, in your home, to fit your body and accommodate your sleeping preferences.

Helix Sleep’s founders—Jerry Lin, Kristian von Rickenbach and Adam Tishman—started their company on a single premise: Each sleeper needs a fully tweakable mattress to account for all sorts of physiological and sleep-behavioral nuances. (Those who sleep on their stomachs, for instance, need firmer support than do back-snoozers.) By filing out an extensive questionnaire, Helix matches beds to sleepers.

“There are a number of important metrics we take,” says von Rickenbach. “We tend to categorize them across physical body type, sleeping style and personal preference.” Height and weight offers up your body mass index (BMI). Helix also looks at body type. “Someone with broad shoulders and an athletic build,” she says, “would have a different manner of pushing into the bed than if someone who is tall and narrow.” 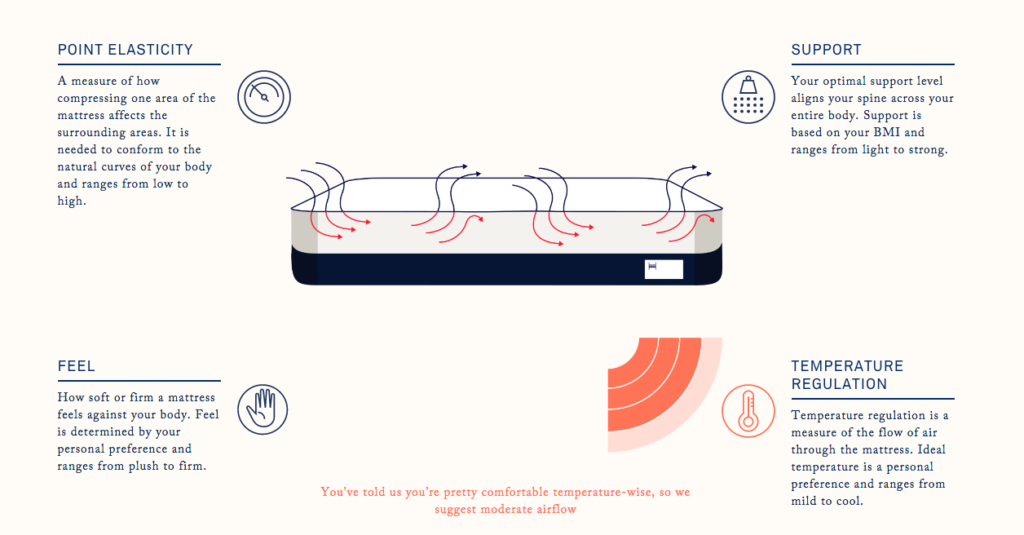 Temperature regulation is an important part of building a better mattress

Your sleeping style (ie, the position you sleep in) dictates how your body pushes into the bed. “The personal preference category relates to feel,” says von Rickenbach. How soft or firm does the bed feel for you? Temperature, too, plays a roll. Do you tend to get hot or at cold while you sleep? An underrated feature of beds, which can regulate temperature, is airflow through the mattress. Better regulation through airflow, theoretically, leads to a better night’s sleep.

And then there’s something called Point Elasticity. 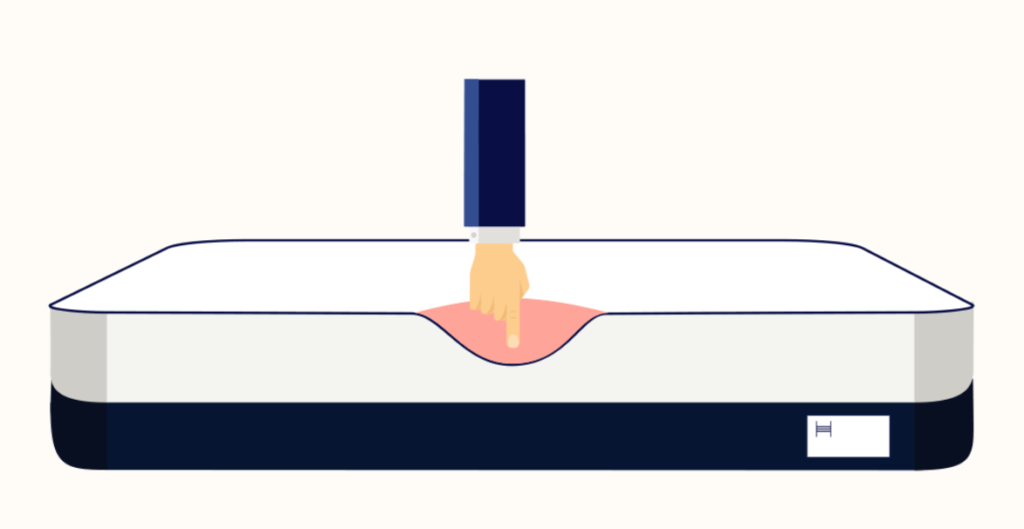 “That’s the ability of the mattress to accept one part of you pushing in at a specific point, and still be able to support a part of you that’s pushing in less,” says von Rickenbach. So the mattress made for to the broad-shouldered athletic person would accept a shoulder pushing into the bed and still evenly support the lighter resting torso and hips.

But do all these metric really make a difference? I decided to find out.

The Helix arrives on your doorstep in a hexagonal tube. While the tightly-packed tube makes maneuvering the box into your door and across your home fairly easy, it weighs a hefty 70 pounds—which feels even heavier when making your way along three flights of stairs. Good luck to anyone in an apartment walk-up. 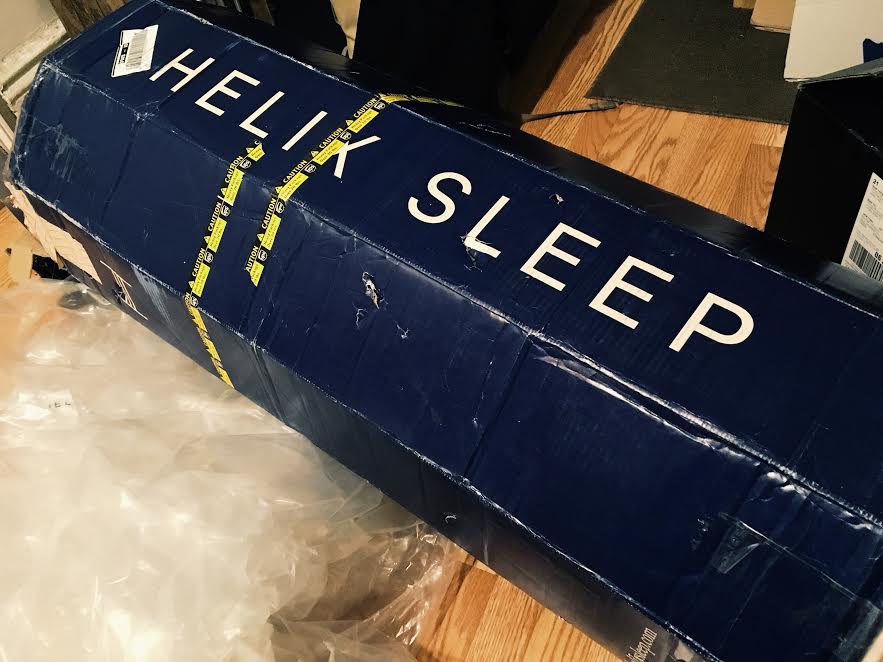 New Helix mattresses arrive rolled up in a box. Stripping the plastic allows the bed to unfurl and begin inflating

Opening the Helix box and deploying the bed is simple. Just rip open the top and slide out the plushy, rolled up goods. I’d recommend a second pair of hands for helping you though. It is still a 54-inch by 75-inch mattress. I opted for the “Full” size, which goes for $800. Mattresses start at $600 (depending on size) and those with significant others can customize each half for an extra $100.

Using an included cutter, clearly indented lines show buyers where to slide to start cutting their mattress out of the tight plastic casing. Once the plastic is cut, the mattress inflates on its own. According to co-founder Jerry Lin, “the combination of materials we use—latex, microcoils, and high quality polyfoam—allow for the mattress to quickly inflate back to its original shape.” I was told it would take one to two hours for this. But it was risen and ready in about 45 minutes.

After it inflated, the mattress was ready to use!

Before receiving the mattress, I had filled out a profile on the company’s website, entering in my height, weight, gender, body shape, and various sleep preferences. (Do I like a soft or firm mattress, for example, or do I find I get hot at night? I like firm and no, I don’t overheat.) When I laid down on it that first night, I immediately felt a difference. It was plush. 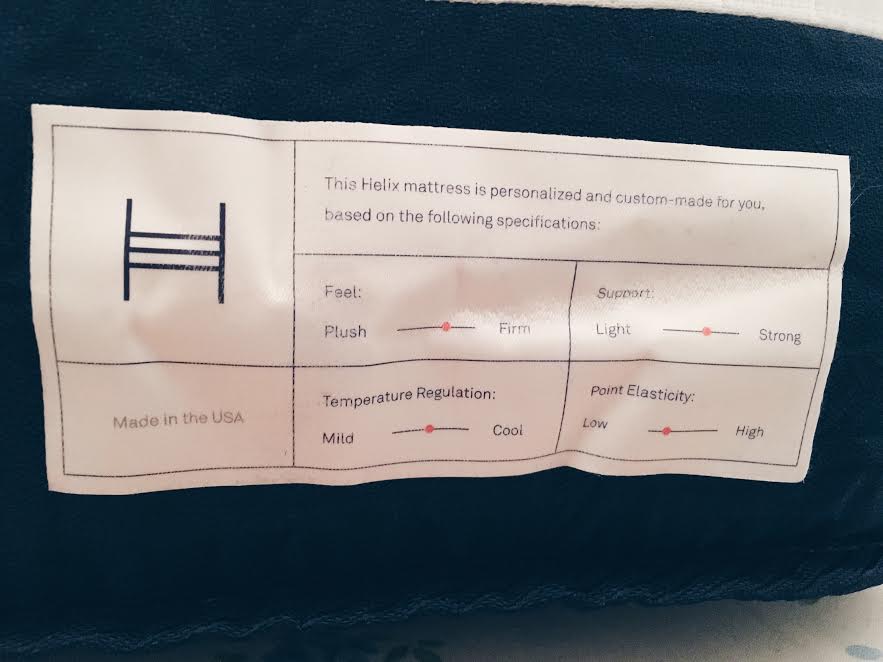 How i customized my Helix mattress

I tend to sleep on my stomach. So I chose a mattress that accounted for that. I have a relatively slim figure, another detail Helix takes into consideration. Age range is also an important metric. Knowing I’m a twenty-something millenial, Helix likely made a bed fit for a snake person.

If I could go back and change one metric, it would be the feel of the mattress. Helix’s preferences work on a 7-point scale, from “Very Soft” to “Very Firm”—the most popular being “medium firm.”

I chose badly for my sleep preferences. I selected “medium” assuming it was a good all-around option. Though with an athletic build I should have gone firmer. With even one preference point below the average, the bed felt…a little too plush. While my back felt better in the mornings, the first few minutes of getting in bed at night reminded me of my regretful decision.

But the feel of the bed was only part of the equation. 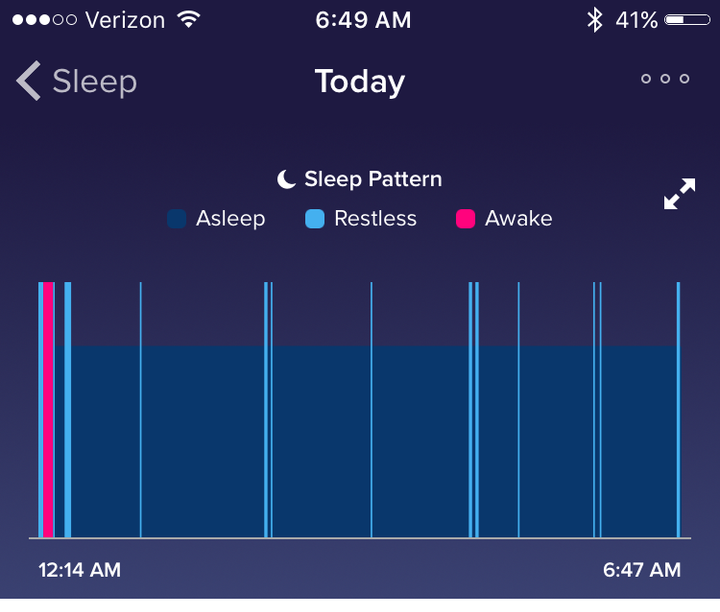 Fitbit Sleep Data For One Night

Fitbit gathers data on time awake, time slept and time you spent restless during the night. See all seven days worth of data for both beds in the slideshow below.

Fitbit’s wearable fitness trackers can track sleep. So I used the company’s Charge HR to do just that.

Comparing a week’s worth of sleep data (included in the slideshow at the bottom of this review) on my old 15+ year old Simmons Beauty Rest mattress bed with seven days on the Helix (also included below), I found something surprising: Not much had changed. I added up the restless moments-per-night between both sets and discovered they were nearly identical: 67 times restless on my old bed and 66 times on the Helix.

My sporadic sleep schedule probably didn’t help: i.e.: occasionally returning home late from events or random bedtimes on weekends. Which likely says more about me than it says of either of the beds, though both weeks had their own weekend nights and industry events.

After I got my data in order, Helix clued me into why I might have seen such similar results. Turns out it can take up to three weeks to notice a difference from an old mattress to a new one. “It just takes your body time to get used to the new feel and support characteristics, especially if you’ve been used to sleeping on a mattress that was likely non-ideal for these metrics,” says Helix co-founder Adam Tishman.

While I initially expected Helix’s bed to be the mattress that saved my sleep once and for all, that ended up not being the case. Sleeping on one’s stomach could, over time, be detrimental on a regular bed when compared to sleeping on a Helix. My Fitbit data containing 7 days of both a standard bed and a Helix shows they average out to be around the same. Someone older may see quicker benefits than someone in their 20’s.

If you’re looking for a new mattress, it’s definitely worth considering. And if you’re sleep profile is anything like mine, just make sure you choose medium firm. 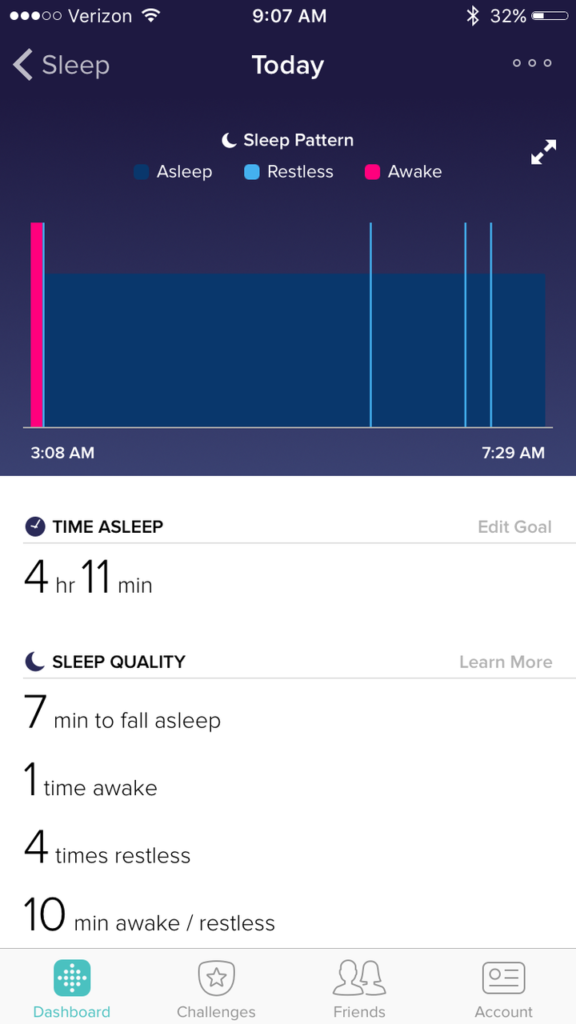 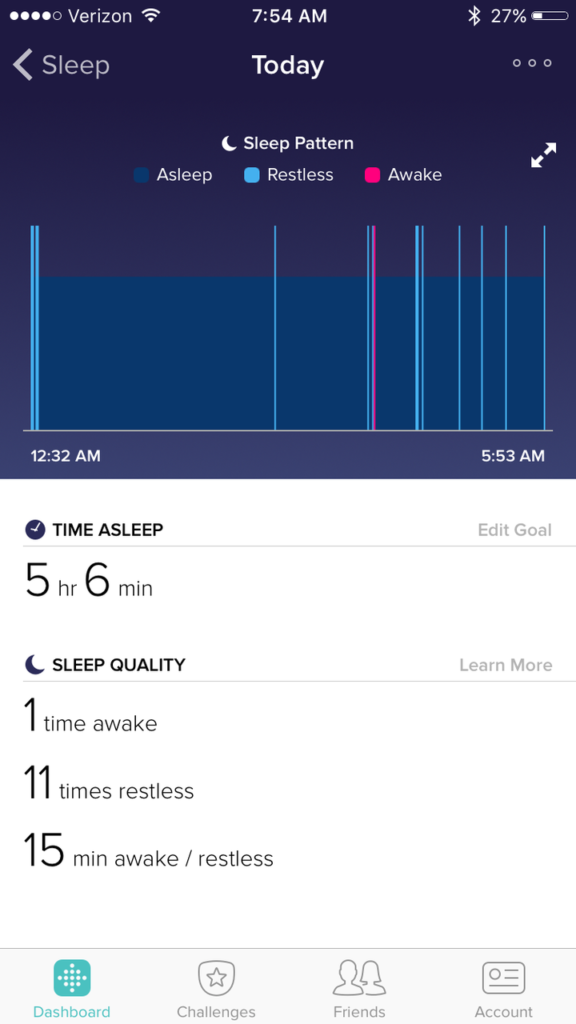 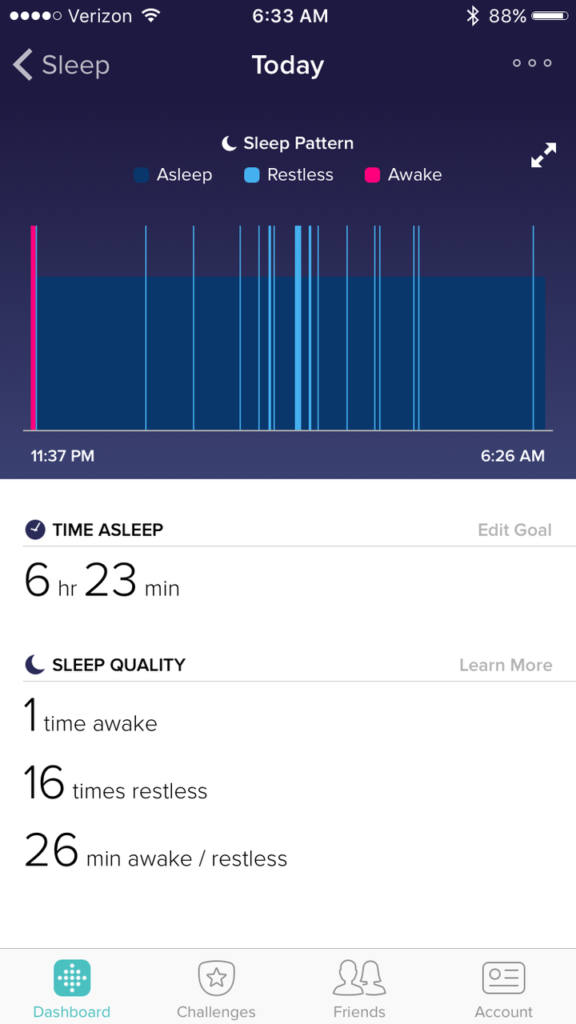 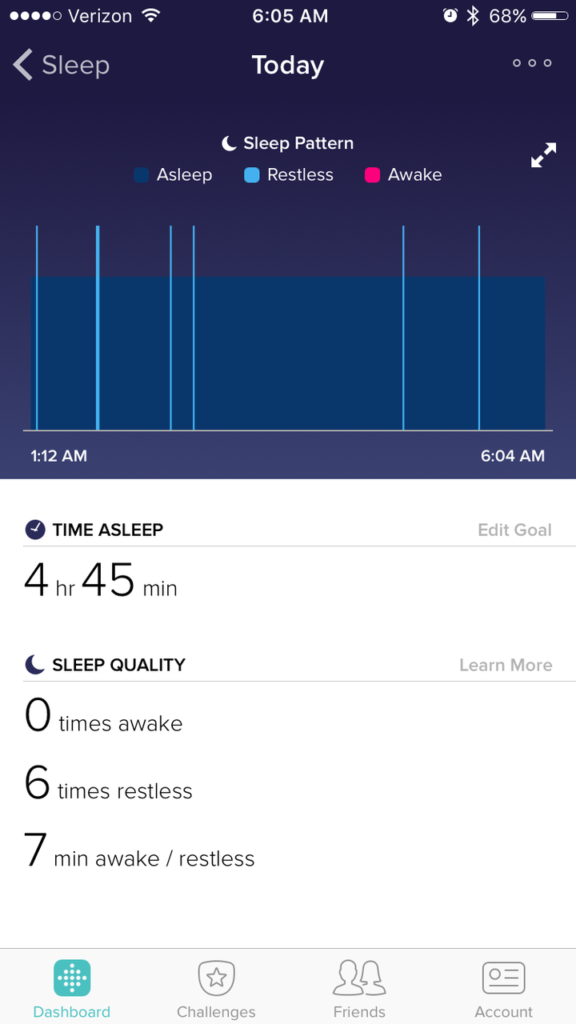 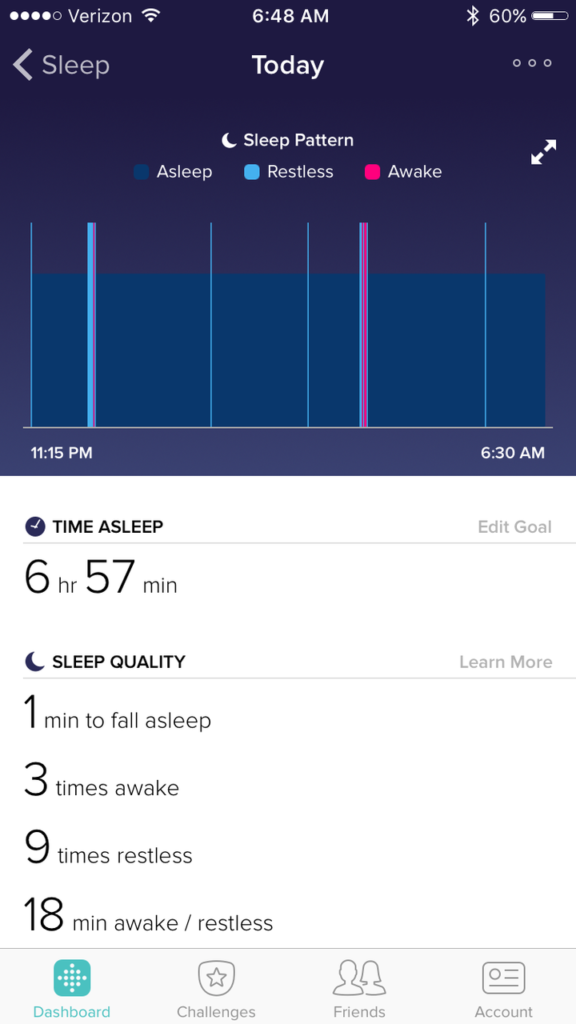 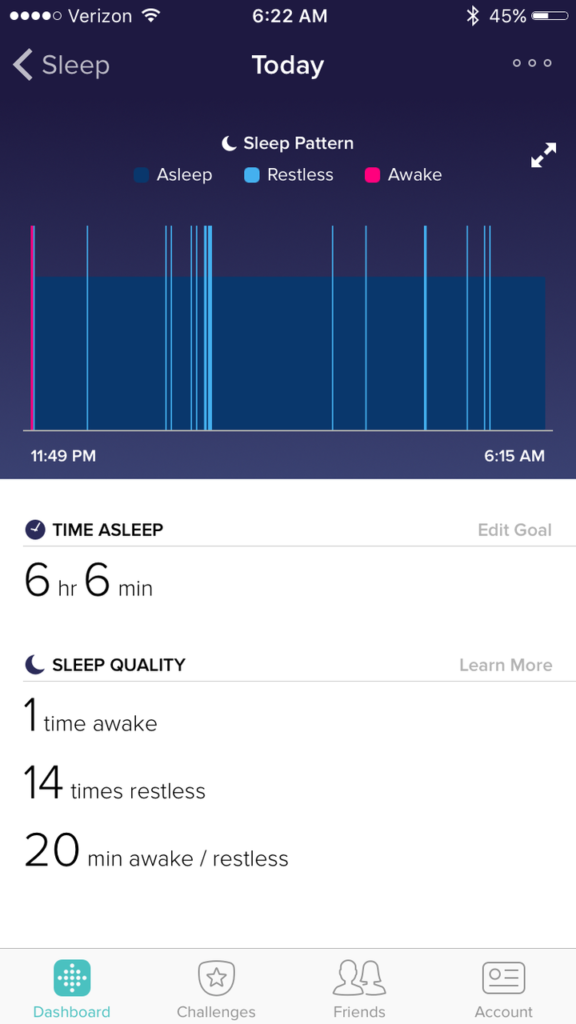 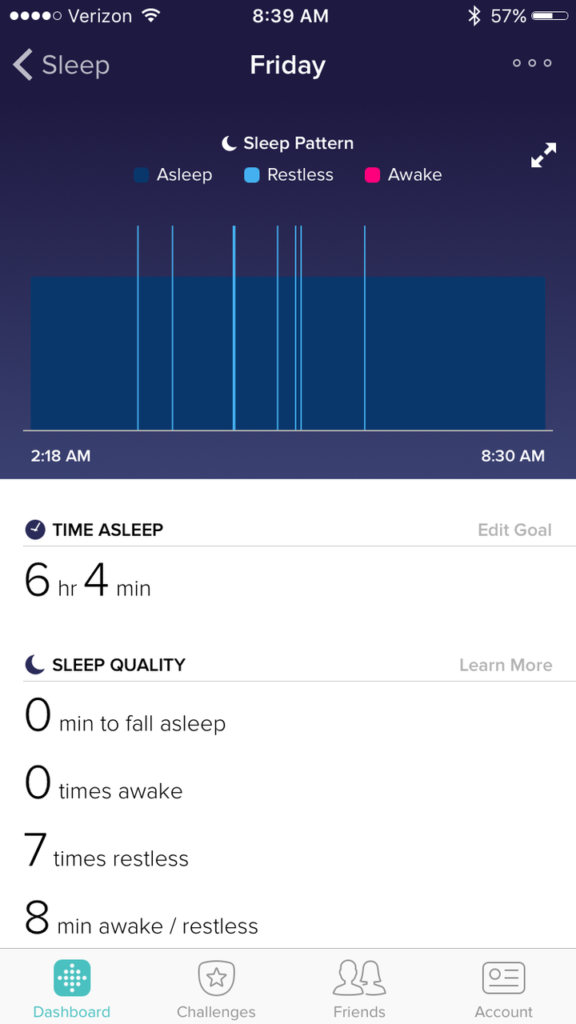 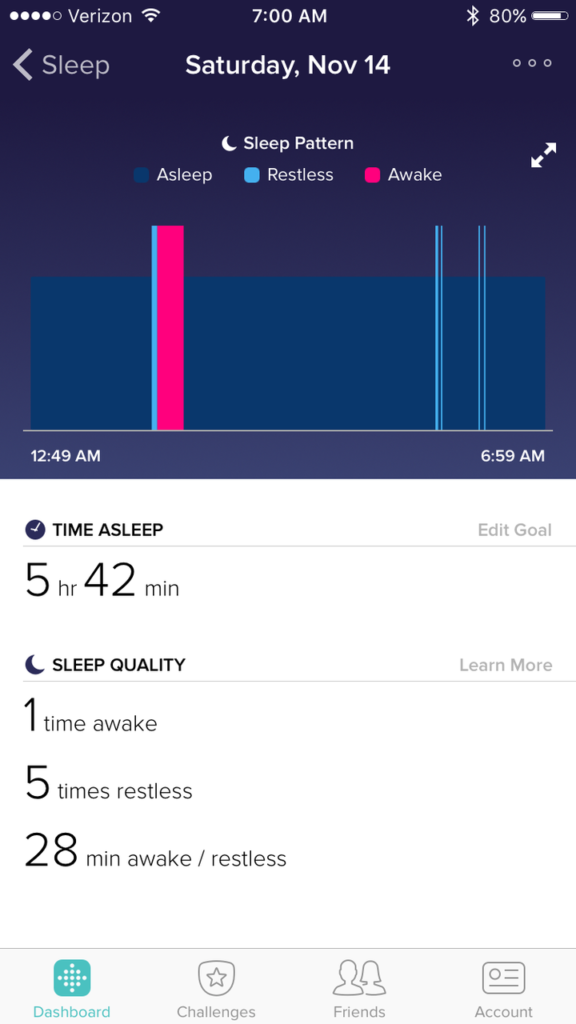 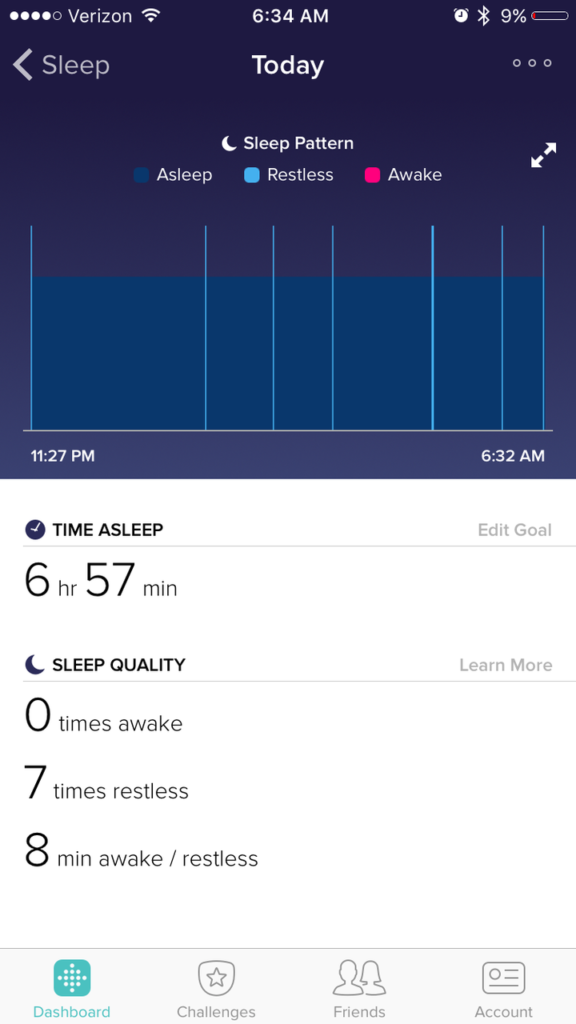 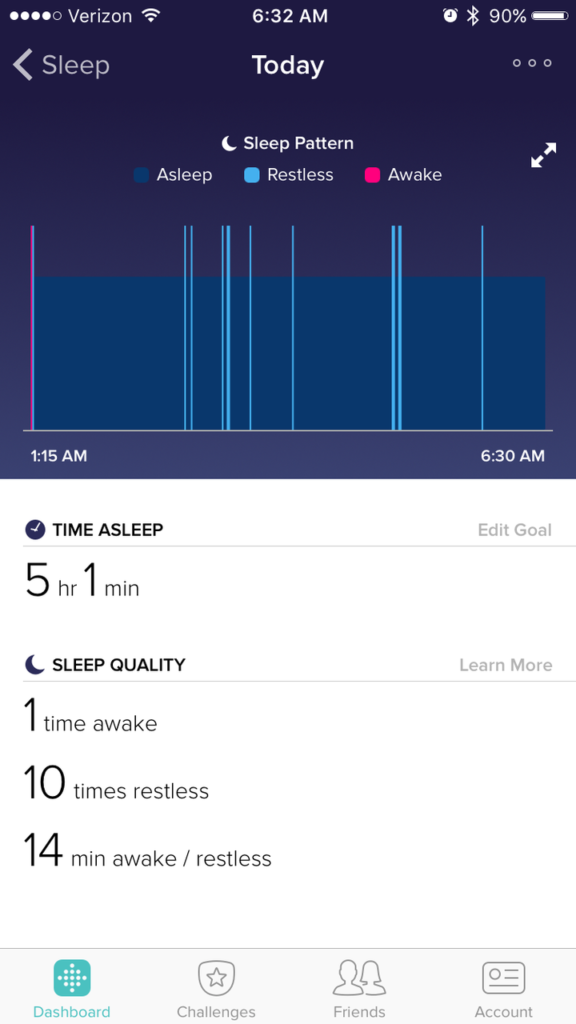 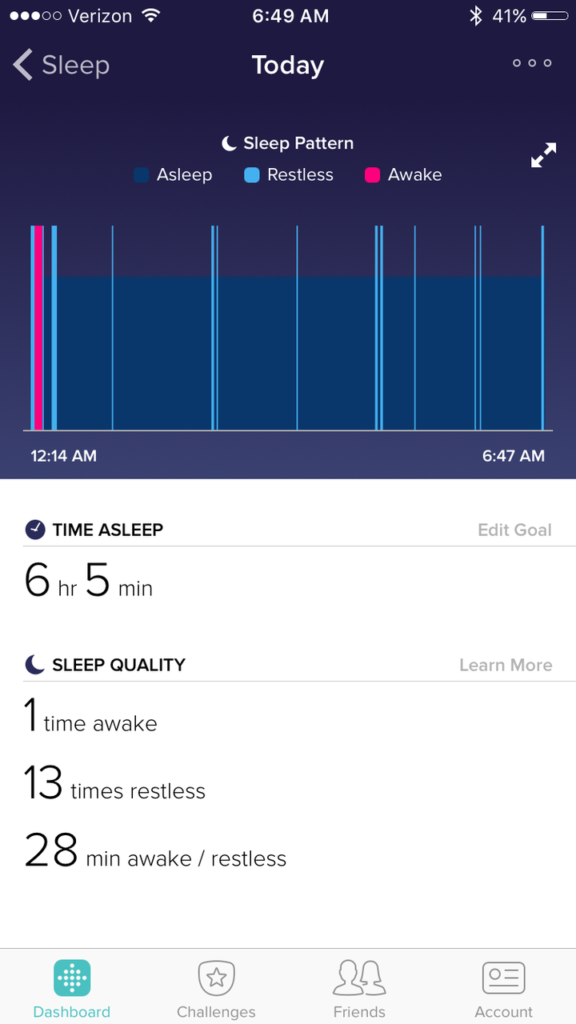 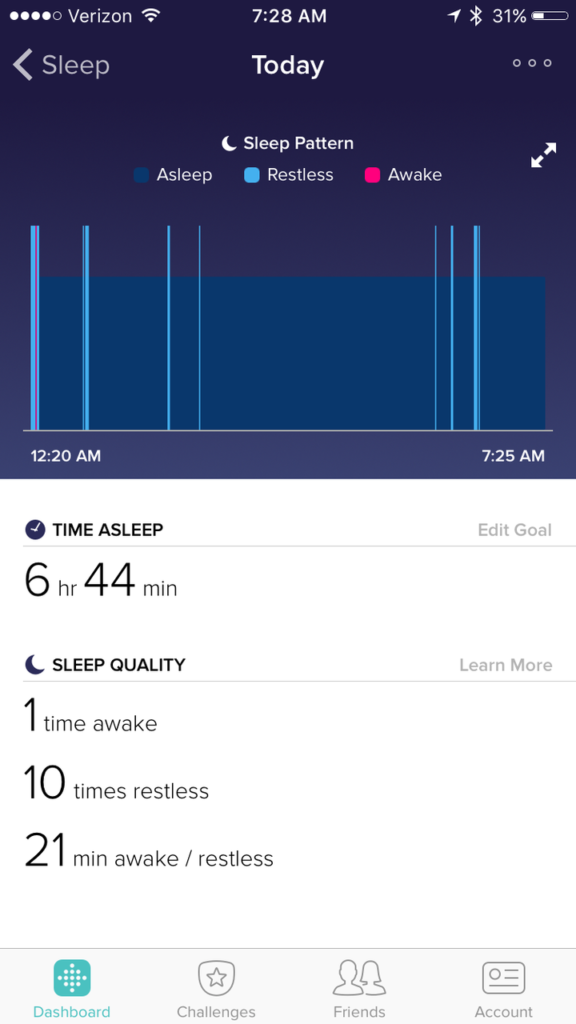 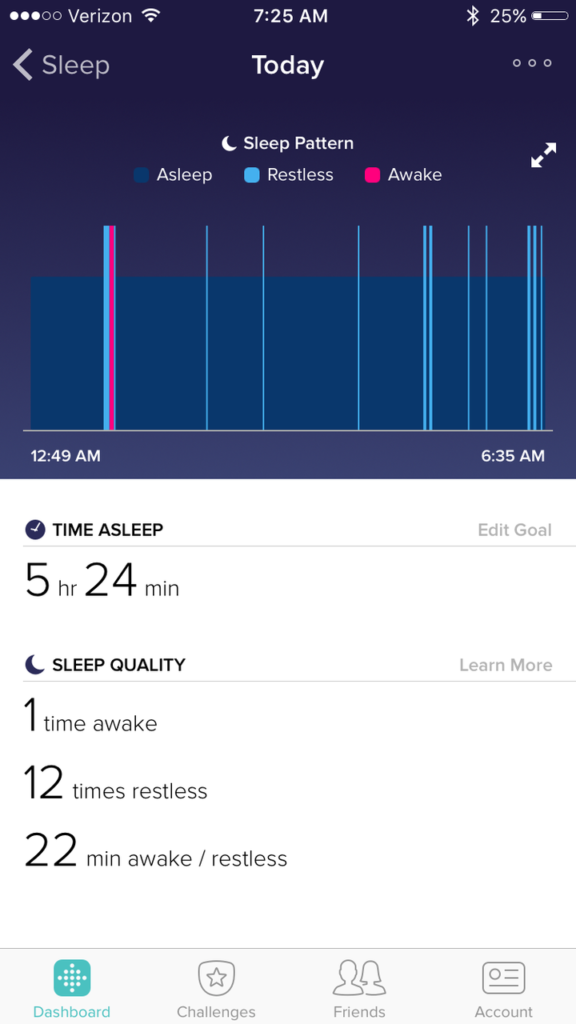 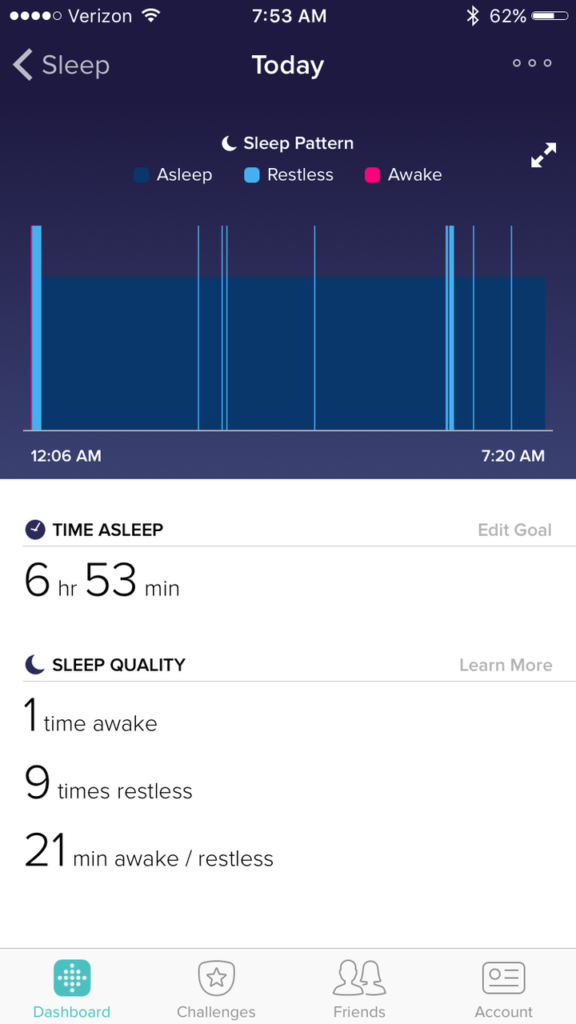