Amid a 'triple-demic,' scientists investigate two of the viruses interactions and co-infections. 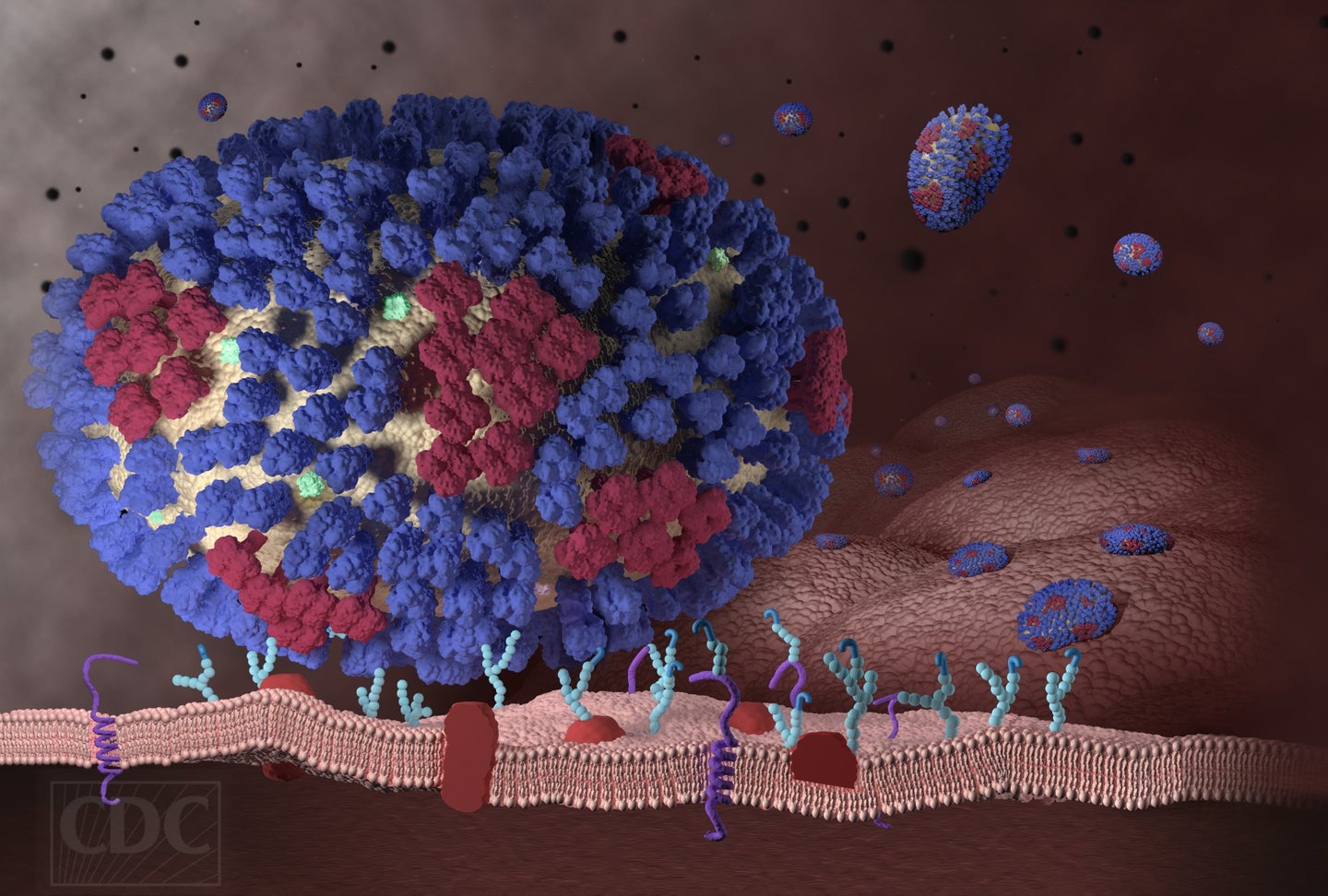 The early stages of an influenza infection. CDC
SHARE

As a possible fall and winter “triple-demic” of influenza (flu), respiratory syncytial virus (RSV), and COVID-19 ramps up in the United States, scientists are learning more about hybrid viruses and co-infections that occur when two viruses infect cells at the same time.

RSV and the flu can form a hybrid virus that can escape our immune system’s best defenses and infect lung cells, according to a study published earlier this week in the journal Nature Microbiology. The study marks the first time that such a cooperation between viruses has been observed. The researchers believe that it could help explain why co-infections can lead to significantly worse illness in some patients, including the notoriously difficult to treat viral pneumonia. Since viral pneumonia is caused by a virus and not bacteria like bacterial pneumonia, it doesn’t respond to antibiotics for treatment.

According to the study, co-infections by more than one virus represent around 10 to 30 percent of all respiratory viral infections. These types of infections are especially common in children, and their clinical impact is still unclear. Some previous studies show that co-infections do not alter the outcome of disease, wile others have found an increase in cases of viral pneumonia from them.

“Respiratory viruses exist as part of a community of many viruses that all target the same region of the body, like an ecological niche. We need to understand how these infections occur within the context of one another to gain a fuller picture of the biology of each individual virus,” said first author Joanne Haney from the MRC-University of Glasgow Centre for Virus Research, in a statement. “Co-infection studies can help us in preparing for future pandemics by understanding how the introduction of one virus can influence and interact with other circulating viruses.”

The team used human lung cells in a lab to study how both influenza A and RSV behaved when they infected the cells at the same time. According to the World Health Organization (WHO), influenza A is the only class of influenza viruses known to cause pandemics.

They discovered that in the lab-based lung cell samples, co-infection with both influenza A and RSV could form two new hybrid virus particles that can potentially to evade immunity. They used super-resolution microscopy, live-cell imaging, and cryo-electron tomography (Cryo-ET) to watch these hybrid virus particles. The hybrids contain key elements from both viruses, including their genetic information. One of the hybrid virus particles could infect new cells with influenza A using the entry mechanism that RSV uses, which enabled the virus to remain undetected by the body’s natural immune responses.

The results show that hybrid virus particles could possibly be created during co-infection of the flu and RSV, but it is still unknown if this would happen during a natural human infection rather than in a lab setting.

[Related: The US may be in for a brutal flu season.]

“This was an unexpected but very exciting discovery that challenges what we know about how viral particles are formed within a cell,” said Pablo Murcia, from the MRC-University of Glasgow Centre for Virus Research, in a statement. “Our next steps are to find out if hybrid particles are formed in patients with co-infections, and to identify which virus combinations can generate hybrid particles, although our working assumption is that only few respiratory viruses will form hybrid viruses.”

The flu and RSV are most common during the winter months. The Centers for Disease Control and Prevention (CDC) estimates that between eight and 13 million people will become infected with the fly this season. The National Institutes for Allergy and Infectious Disease (NAID) estimates that RSV infects 64 million people each year, with some leading to serious cases, with RSV is already straining pediatric hospitals in several states.