Has Measles Begun a Triumphant Return?

Why the virus may have visited Disneyland 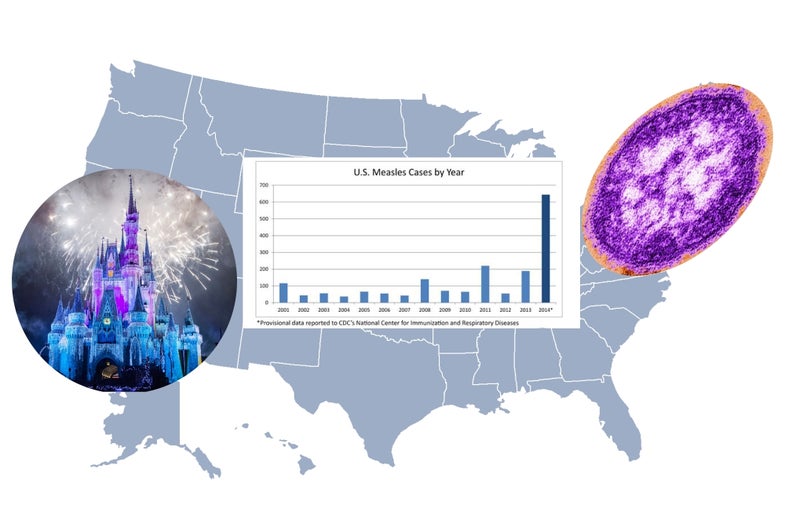 It’s become a common refrain for any champion. As soon as you win the prize, a camera is there to hear the joyful refrain, “I’m going to Disneyland!” The carefully thought-out marketing ploy has since become an analogy to reflect triumph in any arena. But the most recent visitor may have signaled a most unwanted victory.

Last week, the California Department of Public Health confirmed one of humanity’s most contagious diseases, measles, had come to the Magical Kingdom. The viral visit took place between December 15 and 20 and began the largest outbreak in over a decade. While Mickey, Minnie, and the gang are now safe, the virus continues to spread with over two dozen cases spread out over four states.

This particular outbreak, while disturbing on many levels, is one more indication of the need to reconsider the decades-old belief that the virus was controlled in the United States. After all, it comes on the heels of the worst year since the documentation of measles elimination in 2000. The number, 644, might be nothing compared to the over 194,000 cases reported worldwide in 2013 (or the 4 million per year prior to widespread use of the vaccine) but still portends a rather ominous future.

Apart from the numbers, there is another reason why measles’ Disneyland trip may be a sign of microbial victory. The virus can spread effectively only when the population is not properly vaccinated. Based on elimination strategies, success can only be achieved and maintained if a certain percent of the population is immune. This so-called elimination threshold is greater than 93 percent for measles. This leaves some room for sporadic and imported cases, but they should not lead to the large numbers seen this past year. A perfect example of this happened in Canada in 2007 when a localized outbreak left 94 people ill.

But when the percentage of immune individuals drops below the 93 percent elimination threshold, due to a lack of vaccination coverage, the virus can spread easily. Prior to mass vaccination, a single infected case could cause up to 10 secondary infections. In a partially vaccinated population, that number drops to between six and eight. When the elimination threshold is achieved, there is only minimal spread such that an infected person cannot spread the virus to others.

Sadly, while the evidence shows the necessity for widespread use of the vaccine, the number of people choosing to eschew the shot continues to rise. In 2009, an analysis of the exemption rate was published revealing the extent of the problem. Between 1991 and 2004, the overall US exemption rate for religious, philosophical or personal beliefs went from just under 1 percent to 2.54 percent. On a more local level, certain districts, such as Ferry County in Washington State, saw as many as 26.9 percent refusal. This reveals not only the non-homogeneous nature of vaccination coverage in America but also the potential for hotspots for outbreaks.

Such an event happened in Quebec, Canada in 2011. After 21 cases of measles were imported, an outbreak ensued with 725 cases in total. The reason was due to the local elimination threshold, which was barely achieved. Once the virus entered the population, the unvaccinated were at greatest risk while those who had not been properly given the two-dose regimen also fell victim to infection.

In the year following, a larger outbreak occurred in Manchester, England. It took nearly a year to be controlled. In this event, 1,073 cases were identified. While representing one of the largest outbreaks since the vaccine was introduced, in retrospect, the outbreak could have been much worse. Upon examination of the city, some 31,600 children were under vaccinated. More importantly, at least 10 percent of those were considered to be fully susceptible to infection. Yet the elimination threshold had been met meaning a larger number of children – even those without proper protection – were possibly protected.

Last summer, the CDC released its latest statistics on vaccination coverage. In terms of measles, the number of those properly vaccinated is 91.9 percent across the nation with ten states showing over 95 percent coverage while 17 states had less than 90 percent. For those states with numbers less than the 93 percent elimination threshold, measles may have a better chance at causing infections. Moreover, the chances of initiating a widespread outbreak are higher.

As for the future, it may be too early for us to cede victory to this once-eliminated and yet seemingly returned virus. After all, when one looks at the number of cases last year, the majority are still imported and not spread within the community. Yet, the trends show the potential for an even worse year than last particularly if vaccine coverages continue to wane. If the elimination threshold is not met sooner than later, we can expect measles may want to claim even more victories and make yet another visit to a glorified place. Maybe even Graceland.