Other record-breaking produce could fit in a backpack, but pumpkins can be massive. 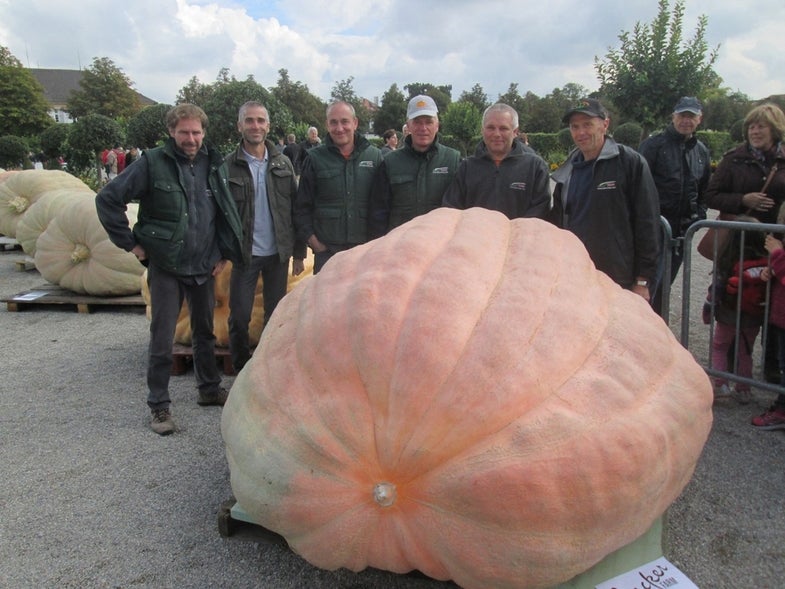 The world of produce has its fair share of imposingly large specimens. For the committed grower, just about any fruit or vegetable is fair game. There are 350-pound watermelons, apples the size of a lumpy dodgeball, and tomatoes as heavy as a newborn child. The world’s largest onion could make enough French onion soup to feed 36 people, while the heaviest carrot is made from so many tentacles it could star in its own B movie.

But pumpkins easily surpass them all. Last year, a new world record was set by a pumpkin that hailed from Belgium. It weighed 2,624.6 pounds. And it probably won’t be able to claim the honor for long. Communities of growers around the world are dedicated to spurring pumpkins to ever-greater bulk.

But what gives pumpkins their edge? Why is it that we can coax pumpkins to grow beyond a ton, while other record-breaking produce could fit in a backpack? What drives these squashes of unusual size?

Growing any record-breaking vegetable is a matter of both choosing seeds with good genetics and carefully nurturing them. “There’s not a lot of magic really to it, it’s really more of a matter of horticultural art,” says Karl Niklas, a plant evolutionist at Cornell University. “In theory, any vegetable, any fruit can grow to many more times what we normally see.”

Pumpkins, however, are special. One reason that some of them can reach such staggering sizes is that pumpkins grow right on the ground. “If you’re trying to grow a really big apple or even tomatoes, you have to support it some way artificially to keep it from just killing itself essentially,” says Kevin Snyder, the Great Pumpkin Commonwealth’s Northeastern United States representative.

And a pumpkin’s growing season can last over 100 days, so they have more time to reach gargantuan sizes than many other crops do. Another advantage pumpkins—and close relatives like watermelons—have is their thick, woody rind. “When you think about a tomato, that’s really a big bag of water,” Niklas says. “It might get so large that it ruptures its skin.”

Other fruits and vegetables face similar limitations. “I don’t think you’ll ever see grapes the size of a watermelon,” Niklas says.

Record-breaking pumpkins aren’t the same type you put on your doorstep for Halloween; they’re a variety called Dill’s Atlantic Giant. Over the years, people have bred these titanic pumpkins to produce increasingly large offspring. But not every pumpkin seedling has the same potential for greatness. It’s possible that the winners have inborn advantages, such as larger vascular tissue. Or they might be able to grow faster than their competitors, resist pests, or draw more nutrients from the soil, Niklas says.

People use the seeds from these superior pumpkins to grow the next round of potential victors. Growers are attracted to pumpkins that seem extra thick or dense, says Andy Wolf, president of the New York State Giant Pumpkin Growers Association. A pumpkin’s weight can be estimated from its height and girth; the most promising are heavier than these measurements would suggest. “If you have a pumpkin that’s measuring 1,500 pounds for example, and it hits the scale and it’s over 1,700 pounds, that catches people’s attention,” Wolf says.

The making of a champion

People have been weighing and showing off their pumpkins for more than a century. It wasn’t until the late 1970s, though, that giant pumpkin growing competitions took off, Snyder says. The first 1000-pound pumpkin trundled onto the scene in 1996. Since then, there have only been four years when the previous year’s world record hasn’t been broken.

In 2005, Wolf took the state record with a pumpkin that weighed 1407 pounds. At the time, it was the third heaviest pumpkin in the world. This year, a 1407-pounder wouldn’t even have made the top 200. “It’s a fairly consistent march towards higher and higher weight overall. I don’t really see any slowdown in how big these pumpkins are getting,” Wolf says. “I hope there isn’t a limit to it. I hope it just keeps going.”

Growers keep track of the genetic lineage of top-notch pumpkins—the family tree for some pumpkins goes back to the 1980s. “You’re not going to get a seed from your local Lowe’s store or your local greenhouse that’s going to give you world-record potential,” Snyder says.

But it’s not enough to select seeds with an auspicious pedigree. Growers must also guide every aspect of the pumpkin’s development. “You can grow a 400 or 500 pound pumpkin with little effort,” Snyder says. “But to get up to those weights of 1500 pounds plus, that requires a lot of dedication. People don’t go on family vacations, and plan their workday around how they’re going to handle their pumpkin plants.”

Preparations begin in the fall; Wolf says he has just finished adding leaf matter and fertilizer to enrich the soil in his garden. “Compared to what people normally do for regular Halloween pumpkins, this stuff is all taken to the extreme,” he says.

They plant the seeds in indoor pots in April, moving them outdoors in early May. Shortly after, the pumpkins begin to shoot out vines. People hand-pollinate the flowers as early as possible to give their prize winners more time to grow, Snyder says. The baby pumpkins start life as a marble-sized node at the base of the flower, typically in late June. They hit their fastest growth rate about 30 to 50 days after pollination, when they can pack on nearly 60 pounds per day. By late September or early October, the pumpkin will reach its full size.

Meanwhile, growers must keep the soil full of nutrients, protect the pumpkin from the elements and nibbling mice or rabbits, and slake its voracious thirst. “Most people on a competition plan are applying around 100 gallons of water per day to one plant,” Snyder says. The pumpkins can’t be rotated, so growers must position the swelling fruit carefully to make sure it doesn’t put stress on the stem.

In the United States, there isn’t a single prime location for growing pumpkins. “If it’s a really warm year the guys down south might be a little bit too hot for what would be optimum conditions, and in the cooler years the guys up north might be too cold to be able to pack the weight on during the summer,” Wolf says. However, hotspots are found in New England, California’s Napa Valley and the Pacific Northwest, and the Upper Midwest.

One thing growers do not do is ply their pumpkins with beer or milk. This myth probably stems from one of Laura Ingalls Wilder’s Little House books, which features an account of her future husband growing a prize-winning pumpkin by feeding it milk, Snyder says. In reality, injecting milk into the vine could make a pumpkin rot.

Today’s pumpkins are large enough that transportation is becoming an issue. The pumpkins ride to competitions in pickup trucks and, increasingly, trailers. Sometimes people will hire tree removal services to use their cranes to lift the pumpkins out of their backyards, often hoisting the precious cargo right over the top of the house.

At the weigh-off site, the competitors must be free of holes and rotten spots. The heaviest pumpkin takes the grand prize. “It’s not a beauty contest, it’s sheer weight,” Wolf says. Some contests do offer an award for the prettiest (or ugliest) pumpkin, though.

Once the fanfare has died down, the pumpkins technically could be eaten—but few would recommend it. The pumpkins’ high water content makes for a rather bland flavor. “They’re kind of like the Coors Light of the pumpkin world,” Snyder says. “Yeah it is pumpkin, but it’s watery and doesn’t have a strong taste.”

Each year, the Great Pumpkin Commonwealth sends a few of the top pumpkins to New York City to be displayed in the New York Botanical Garden. The runners-up are often featured in carving exhibitions and other displays; Snyder has sold some of his giants to Disney World.

Pumpkin growers are united in their quest for monumental produce, but are otherwise a sundry lot, Wolf says. Few are actually farmers. “I know guys that grow pumpkins who are doctors, lawyers, post office workers,” Wolf says. He recommends that newbies find a mentor in their area who can give them advice tailored to their climate.

So what does the future hold for giant pumpkins? “I think we will see 3,000 pounds,” Snyder says. Along the way, growers will fine-tune their control over the pumpkins and their environment. Already, they can take samples of the plant’s tissue from the leaf stalks or leaves and send them to labs for analysis. This tells them how much of various nutrients the plant is receiving so they can adjust their fertilizing schedule. In future, soil moisture probes will become more common, Snyder says. He expects to see people manipulate the plants’ carbon dioxide levels as well.

Other fruits and vegetables may never match the most eminent pumpkins in plumpness or public admiration. “In North America pumpkins have always been king,” Snyder says. But giant watermelons are gaining traction in the South, he says. Tomatoes and gourds are becoming more popular as well, while England is a hotspot for giant onions.

Ultimately, the processes of raising pumpkins and other colossal vegetables aren’t really that different. “You have to be willing to devote a lot of time, energy and even money into that project,” Niklas says. “It’s not for the faint of heart or the lazy.”