The booster was supposed to keep volunteers safe from HIV infection--but it failed. What now? 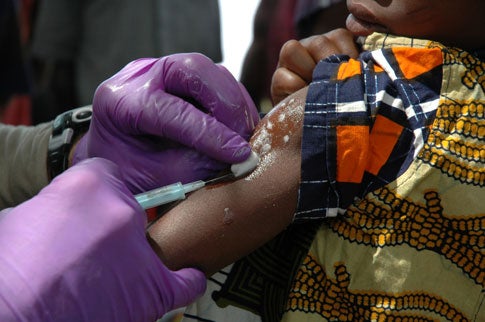 September brought lousy news from the front lines of the fight against AIDS: In clinical trials, the most promising HIV vaccine in the pipeline failed to prevent infections. But researchers hope that tactical setbacks will deliver crucial insights. “We’d be a lot happier if we were looking at why it did work,” says University of Washington AIDS researcher Lawrence Corey, “but we can learn a lot from why it didn’t.”

The most important–and disturbing–lesson from the trial may turn out to be that the vaccine made things worse. The September tally showed that volunteers who received the vaccine were slightly more likely to become infected than were those who got dummy shots. The difference was so small that it could have been coincidence, says Corey, who heads the International HIV Vaccine Trials Network, a consortium of AIDS researchers. But that possibility won’t become clearer until more data rolls in.

Naturally, researchers had hoped for better. In 2004, the pharmaceutical giant Merck and the National Institute of Allergy and Infectious Diseases (NIAID) began enrolling high-risk volunteers (mostly gay men) to receive a new kind of vaccine. Unlike standard vaccines, it was not designed to generate antibodies. Antibodies are immune chemicals that match telltale markers, or antigens, on a foreign invader. But if antibodies are bounty hunters, then HIV is a master of ever-changing disguises. HIV mutates too quickly to be caught by antibodies.

So scientists came up with a clever new tactic. They designed a vaccine that uses a harmless cold virus to slip HIV genes into cells in the body. Instead of antibodies, this produces an army of immune cells primed to destroy HIV-infected cells. In theory, these “killer T cells” should reduce the number of infected cells to the point where HIV can’t gain a foothold. Even if the vaccine failed to prevent infection, it should lower the viral load–the amount of HIV in the body–thereby slowing the progression to AIDS.

In tests on monkeys, the vaccine did just that, both reducing infection rates and lowering the viral load in those that became infected. Unfortunately, it did neither in the first 741 human volunteers to receive the vaccine: 24 became infected, compared with 21 out of 762 who got a dummy shot. More discouraging, the researchers found no difference in viral load between the two groups.

“The question now is whether this was a product failure or a concept failure,” says NIAID director Anthony Fauci. “We know this vaccine didn’t work. But did it fail because T-cell vaccines don’t work?”

One theory lays blame on the weakened cold virus used to deliver HIV genes to human cells. Most people have at least partial immunity to cold viruses. So the volunteers’ immune systems may have snuffed out the modified virus before it could do its job. Or, Fauci notes, this carrier virus may have itself prompted an unhelpful response by calling forth the “helper” T cells that HIV loves to infect.

Yet another possibility is that the HIV genes used in the vaccine proved a poor match for the HIV strains that infected the volunteers. If so, researchers could simply rejigger the vaccine with more or different genes. The worst-case scenario would be that the response produced by the vaccine matched the infecting strains yet still failed to stop them. “Then we’ll have to reexamine why T cells were not as effective as we thought they would be,” Corey admits.

While researchers continue to parse the failed trial, they are optimistic about the next HIV vaccine trial. Called PAVE 100, the trial will employ a “prime-boost” strategy. Before volunteers receive a modified cold virus similar to the one used in the previous trial, they will get a jab of HIV genes, with the purpose of priming their immune systems for a stronger killer-T-cell attack. Plans call for the trial to enroll 8,500 volunteers in the U.S., Latin America, the Caribbean and Africa.

Fauci remains upbeat but cautious. “I don’t want to use the word ‘promising,’ ” he says of the upcoming trial. “This last one was called ‘the most promising,’ and see what happened.”