A cancer researcher stumbles upon a way to set saltwater aflame. Neat trick, but is his discovery useful? 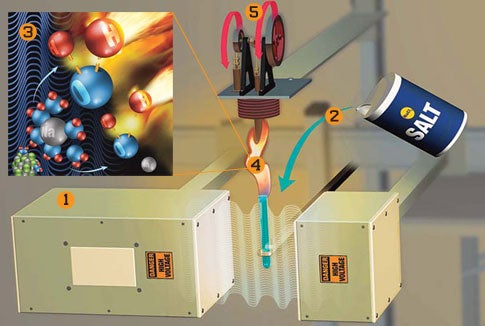 Last winter, inventor John Kanzius was already attempting one seemingly impossible feat-building a machine to cure cancer with radio waves-when his device inadvertently succeeded in another: He made saltwater catch fire. TV footage of his bizarre discovery (check out the video below) has been burning up the blogosphere ever since, drawing crackpots and Ph.D.s alike into a raging debate. Can water burn? And if so, what good can come of it?

Some people gush over the invention’s potential for desalinization or cheap energy. Briny seawater, after all, sloshes over most of the planet’s surface, and harnessing its heat energy could power all sorts of things. Skeptics say Kanzius’s radio generator is sucking up far more energy than it’s creating, making it a carnival trick at best.

For now, Kanzius is tuning out the hubbub. The retired radio- and television- station owner says the saltwater stuff is interesting, but a cancer breakthrough is what he’s really after. Diagnosed with leukemia in 2002, he began building his radio-wave blaster the next year, soon after a relapse. His lifelong fascination with radio provided further inspiration. Radio station antennas, he knew, can turn a bystander’s metal eyeglasses toasty warm. If he could seed a person’s cancerous cells with nanoscopic metal particles and blast them with radio waves, perhaps he could kill off the cancer while sparing healthy tissue.

The saltwater phenomenon happened by accident when an assistant was bombarding a saline-filled test tube with radio waves and bumped the tube, causing a small flash. Curious, Kanzius struck a match. “The water lit like a propane flame,” he recalls.

“People said, ‘It’s a crock. Look for hidden electrodes in the water,’ ” says Penn State University materials scientist Rustum Roy, who visited the Erie, Pennsylvania, inventor in his lab in August after seeing the feat on Google Video. A demo made Roy a believer. “This is discovery science in the best tradition,” he says.
Roy thinks the sodium chloride in the water may weaken the bonds between the oxygen and hydrogen atoms, which are broken free by radio waves. It’s these gas molecules that are igniting, he explains, not the liquid itself. Tests show that the reaction disappears once the radio waves stop. Roy plans to conduct more tests to get to the bottom of the mystery.

Meanwhile, researchers at MD Anderson Cancer Center in Houston and the University of Pittsburgh Medical Center have made progress using Kanzius’s technology to fight cancer in animals. They published their findings last month in the journal Cancer.

**How to Burn Saltwater as Fuel

2 . The waves bombard a solution of regular table salt and water.

3. Exactly what happens next remains a mystery, but one theory posits that the sodium chloride may weaken the bonds between the strong>oxygen** and hydrogen atoms in water. Radio waves break apart the bonds and liberate flammable hydrogen gas molecules.

4. A match ignites the hydrogen, generating an intense flame.