Latest Entry in the Notebooks-for-Everyone Race 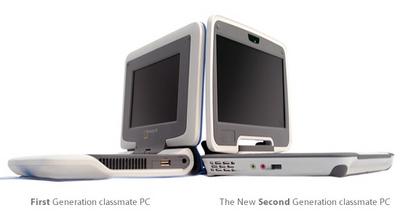 Intel rolled out its new low-cost laptop model yesterday, and the machines will boast bigger, 9-inch screens, 30 GB of storage and integrated Web cameras. These new Classmate PCs, which will go on sale in April for somewhere between $300 and $500, are the second iteration of Intel’s answer to the One Laptop Per Child organization’s cheap laptop, the XO.

At one point the two groups tried to join forces–one of the quibbles stems from the fact that the OLPC uses chips from AMD, not Intel–but that conciliatory effort has been dropped. From the early reviews, though, it sounds like Intel’s latest Classmate, despite some flaws–including not bumping up the resolution along with the screen size, and slightly less attractive looks–could win out over the XO. Though it’s ostensibly been designed and built with third-world users in mind, CNET says the Classmate could also have some appeal for travelers.