What Happens When You Make Someone God Of A Video Game? 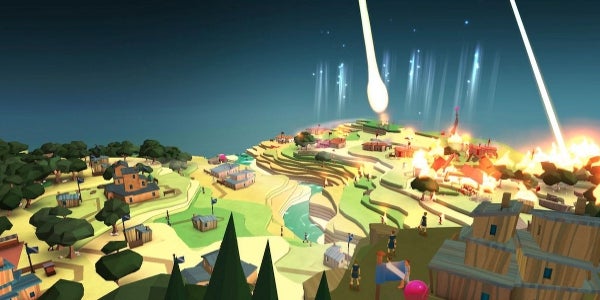 Late last year, gamers started chipping away at a digital cube. The creator of this cube, designer Peter Molyneux, promised a “life-changing” gift to the person who chipped away the last piece. Come May, a normal-seeming dude named Bryan did indeed remove the last piece, and inside was–well, Peter Molyneux, in a way.

The gift was a video, explaining that the winner would be the god of a new online game, called “Godus.” He would influence events in the game. He would change the digital world.

That sounds like a potentially engaging concept for a game, although some are approaching with caution, since Molyneux has a lengthy history of under-delivering: games like Black & White and Fable were hyped as medium-altering works, and ended up just being so-so. (There’s even a parody Twitter account that’s just barely a parody.) Still, at least he’s trying something different in an industry that can be creatively stagnant at times.

Anyway! I mention that so you can be primed for this terrific Q-and-A with the always great gaming blog Rock, Paper, Shotgun. Molyneux explains the upcoming game, and its already unintended real-life consequences, like how players are sending gifts to their future game-god to get on his good side before the game is even released.

[Molyneux:] People are already worshiping Bryan. They’re sending him tribute [sic] and prizes and stuff like that. That just makes it more interesting. And it’s something that could only be done in today’s world, because everyone’s world is connected. He’s here. He has this very fine line connection to all of you. We won’t let this go stupid, because every week we populate his dashboard with new things that we think are going to be interesting and recommendations from the community of Godus players.

RPS: Are they really sending him tributes?

RPS: What kinds of things?

Molyneux: It is slightly bizarre, I know.

It is bizarre. Can’t wait to see the game when it’s released.