We Asked Our Readers Why They Love the Samsung Galaxy Note

I didn't care for the Galaxy Note at all--too big, unable to be either a great phone or a great tablet. But it's been a huge success. Here's why 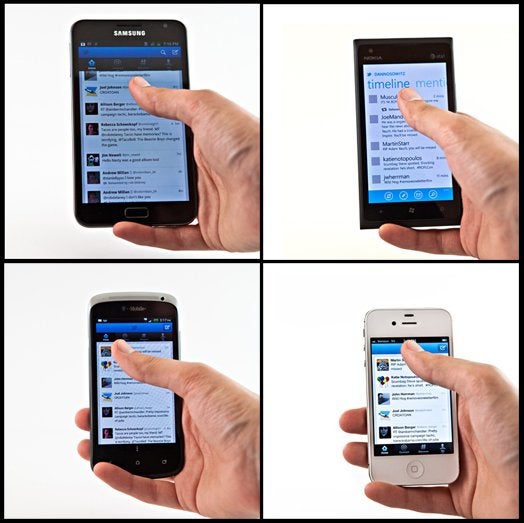 Nobody expected the enormous, 5.3-inch Samsung Galaxy Note to be anything more than a joke. Many gadget reviewers hate big-screened phones. When I first saw it, all I could think was “cheese board.” “Is that the Note? It looks absurd,” said our Web Editor John. Sam Biddle over at Gizmodo called the Note a “distended LED baking sheet,” amongst lots of other creative things.

Now, two and a half months later, the Note has sold well over 5 million units, making it a legitimate hit. You can bet HTC and Motorola and LG will all make a competitor–HTC’s has already been heavily rumored–and last week, Samsung unveiled that its new flagship line, the Samsung Galaxy S III, would have a huge 4.8-inch screen, to the dismay of myself and many other gadget writers.

What do the people buying Galaxy Notes see that we supposed professional reviewers do not? To find out, I talked to a few Note owners and lovers.

I have average-to-small hands, and I use my phone one-handed for just about everything, so any phone with a screen larger than about four inches–4.3 at the very largest–just doesn’t work well for me. I can’t have a big area in an upper corner that is completely out of reach of my thumb. Also, when you get into a toboggan of a phone like the Galaxy Note, you have the curious problem of scaling the entire operating system: Android has enough trouble making apps look good on 3.7-inch phones and 4.3-inch phones. A 5.3-inch phone? Many apps look terrible.

“Using the phone with two hands comes pretty natural after a while.” The people I talked to generally had very different concerns than I did. Tim Gray was an iPhone 3GS user who needed to replace his phone. He’d also been shopping around for a tablet or an ebook reader, looking at the Nook Simpletouch or an iPad, but the price for both was a little too high. Tim has a long regional-rail commute to work, and the Note fulfills his need for both a phone and an ebook reader. (It may not be particularly good at either, in my mind–I find dedicated readers like the Nook Simpletouch and Kindle a much more pleasant reading experience, and I find smaller phones like the iPhone or HTC One S much easier to use as phones–but that is a totally reasonable compromise.) Tim keeps his Note in the inside pocket of his jacket when he’s wearing one, or in a messenger bag when it gets too warm for jackets.

Jayesh Mansukhani said that “portability is not an issue in my eyes.” He says it slips fairly easily into his pocket, and that while retrieving it “can be a bit of a challenge,” it’s “nothing major,” especially compared to what he likes about the phone: watching videos (valid!), editing documents (also valid!), and web browsing (good point!).

But what about one-handed navigation? How do you scroll through a cached Twitter feed while clutching the handrail on the subway? “I don’t lament the loss of the one-handed navigation as much as I thought I would,” said Tim. “Using the phone with two hands comes pretty natural after a while.”

I’m not saying you shouldn’t listen to gadget reviewers. We generally do know our stuff pretty well. But this is an excellent reminder that reviews are subjective. We try to think outside ourselves a bit, but it’s still a review, by a person. My opinion, living in Brooklyn, owning a Kindle, wearing jeans unable to accomodate a phone this size, riding a crowded-ass subway and checking my phone every twelve seconds? The Galaxy Note is not for me, and the Galaxy S III is way too big. But not everyone will agree. And that’s important to remember.