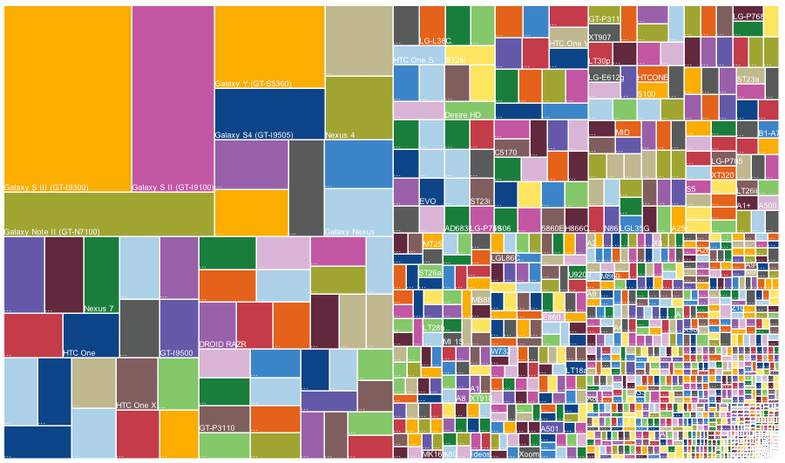 “Fragmentation,” when applied to Android, which it often is, refers to the platform’s tendency to branch off in all different directions from the original core operating system. Google releases a version of Android, and then the manufacturers, like Samsung and HTC, alter it: they add their own software skins on top, they add or remove software, they modify the way the camera software works or what the buttons do.

The colors represent different versions of Android (from 1.1 all the way up to 4.2). The X axis is time, from 2010 up to July of 2013, and the Y axis is percentage of marketshare. You can see that a solid couple of percentage points of people are still using Android 2.3 (the peach-colored section), even though that version is literally years old. The white line shows the decline in use of each version.

All of this makes it very difficult for the user to have a consistent experience, because it’s tremendously difficult for developers to make sure that apps work on all of these devices. And some developers either can’t or won’t ensure that that happens. So we care about Android fragmentation–and this infographic, over at OpenSignal, is a solid look at it, based on the devices that have downloaded the OpenSignal app. It shows how popular each branch of Android is, separating by specific device, brand, version of Android, or screen size/ratio. And look how many different branches there are!

Check out the interactive infographic here.