Wireless accessories such as headsets and fitness monitors are notoriously inefficient because the Bluetooth standard they use keeps them constantly... 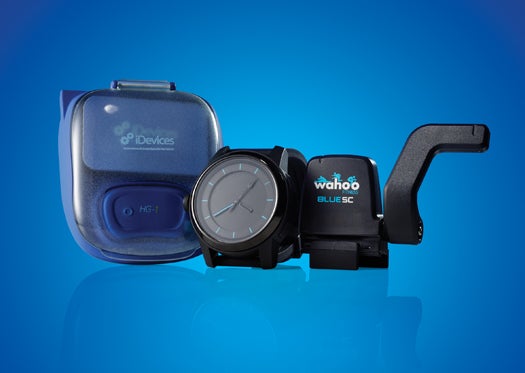 Wireless accessories such as headsets and fitness monitors are notoriously inefficient because the Bluetooth standard they use keeps them constantly connected to other devices—even when there’s no data to transmit. Bluetooth 4.0 (a.k.a. Bluetooth Smart), a new protocol debuting on devices this year, will change that.

After a user pairs two Bluetooth 4.0 devices, both of their radios enter sleep mode. When there’s new data—a pulse reading or text message, for example—the source device’s radio powers up, pings the other device, sends the information, and then goes back to sleep. The process takes about 3 milliseconds.

Since a Bluetooth 4.0 radio isn’t always on, devices can run for days, months or years on a single charge or coin-cell battery. That longevity allows users to consistently monitor data that’s important to them without having to re-pair devices every day or manually sync data.

iThermometer by iDevices (Left)
This adhesive patch is the first thermometer to let parents continuously monitor a sick child’s temperature. Users put the 1.6-inch-long, 0.08-inch-thick rechargeable device [shown in charger] on the child’s forehead and pair it with an iOS device running an accompanying app. The system checks body temperature every two seconds and notifies the parent if there’s a spike. $120 (available December)

ConnecteDevices Cookoo Smartwatch (Center)
When paired with a smartphone, the Cookoo watch alerts a user to incoming calls, messages, e-mails and calendar events with icons that appear on its face. Unlike other connected watches, which require daily recharging, the Cookoo can run for a year on one watch battery.
$130 (available November)

Wahoo Fitness Blue SC Speed & Cadence Sensor (Right)
The Blue SC logs bicycle workouts with as much detail as a stationary bike at a gym does. Riders attach a magnetic sensor to the rear of the bike’s frame and two magnets to a pedal and a rear-wheel spoke. As the magnets pass by the sensor, the system tracks speed, cadence, distance and the bike’s lifetime mileage, all of which it sends to a smartphone. $60