Church Leaders Give Blessing to Gadgets in the Pews

Church pews nationwide were lit up this Easter weekend, and not just by the glow of so many churchgoers making... 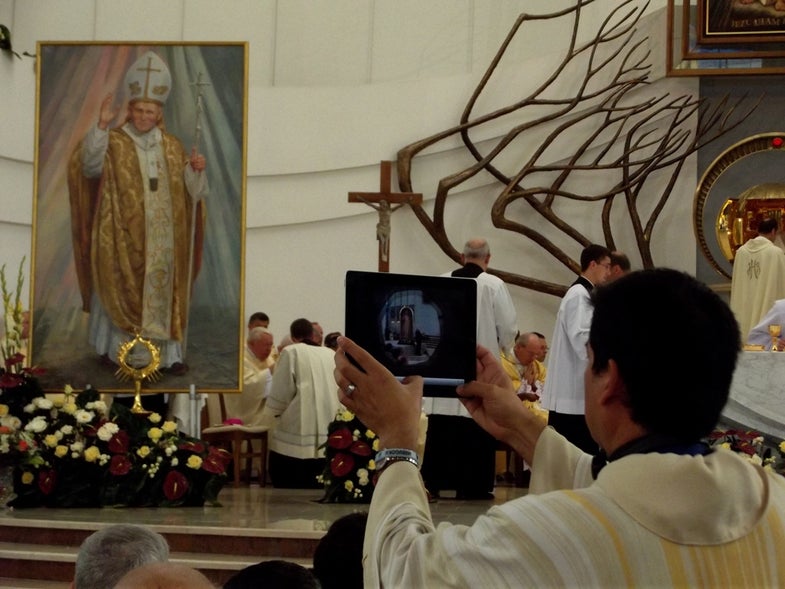 Church pews nationwide were lit up this Easter weekend, and not just by the glow of so many churchgoers making their once-a-year appearances — iPads and smartphones were on plenty of parishioners’ laps, helping people follow along with the ceremonies. Congregants are feeling increasingly comfortable with using gadgets in church, and priests and ministers are condoning it.

In Chicagoland, many congregations encourage the use of gadgets during church, as the Chicago Tribune reports. Worshippers are using Bible apps and web searches to find greater context behind the sermons they hear, and the preachers themselves are using the technology to get their messages out. As long as people are listening, maybe Googling Romans 6:8 and not playing Angry Birds, congregation leaders are glad to encourage the use of technology in the pews — a few even offer WiFi connections. Some churchgoers have even taken to Twitter during services to share the conversation.

“It’s a tool to get closer to God on a weekly basis,” one churchgoer told the paper.

Some observers think modern, evangelical churches would be more open to using smartphones and tablets, the Tribune says. But the Catholic Church, too, has plenty of experience with gadgets and apps — there’s at least one app designed to help priests craft their sermons, another to help people write confessions, and Pope Benedict XVI is on Twitter.

There was a time when the only people allowed to play with toys in church were the children, skimming Matchbox cars along the pews while nibbling on Cheerios. But now it sounds like all the adults are doing it. Some might argue looking at the new iPad’s retina screen is akin to a religious experience, so maybe it makes sense.