Video: Face-Controlled Wheelchair Moves With the Clench of a Jaw

For those paralyzed from the neck down, controlling a wheelchair even with a joystick is impossible. Researchers at Japan’s Miyazaki... 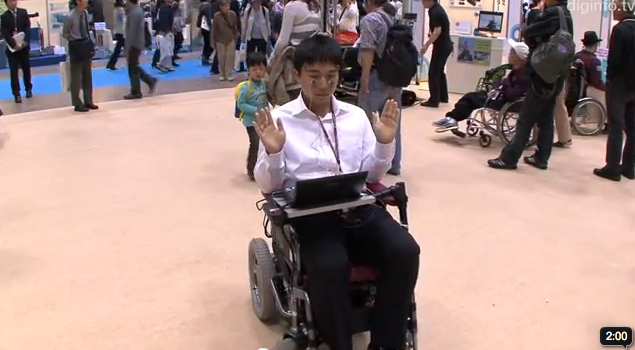 For those paralyzed from the neck down, controlling a wheelchair even with a joystick is impossible. Researchers at Japan’s Miyazaki University have created a wheelchair that solves that problem with electrodes affixed to the face. Certain motions will cause the wheelchair to move, stop, and turn–and it can all be done above the neck.

We’ve seen a lot of advanced wheelchairs and wheelchair accessories, from a Kinect-enabled cart to smarter voice-controlled chairs to solar-powered long-distance vehicles, but the ability to grant independent movement to someone with below-the-neck paralysis (the sometime result of ALS or muscular dystrophy) is new and pretty amazing.

An array of electrodes are attached to the face, and a few distinct motions control it. Clenching the jaw starts it moving forward, and a hard wink on either eye–hard enough to tense the cheek muscle, which triggers the electrode–indicates a turn. A second clenched jaw stops the chair.

The researchers experimented with allowing different speeds, but found that it was more effective to include a proximity sensor instead. The sensor detects if there are objects in the chair’s path. A clear path ahead will increase the speed, while obstacles will decrease the speed until the chair finally stops a few feet from the obstacle.

In the future, the researchers plan to ditch the somewhat unsightly electrodes in favor of a system embedded in goggles, which will be wirelessly synced with the chair. Hopefully that’s possible–the electrodes actually look pretty effective, and this chair could be a life-changing invention for those currently without independent movement.