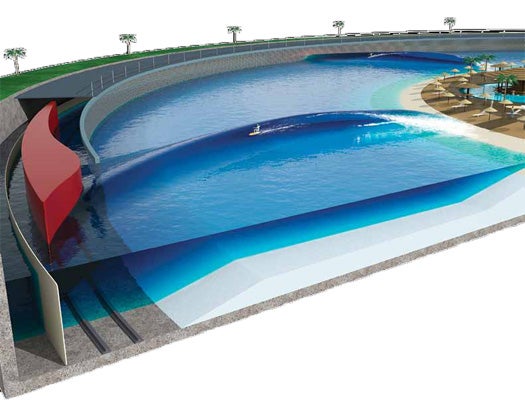 Riding man-made surf typically means catching choppy, underwhelming swells in short five-to-10-second spurts. A project known as the Kelly Slater Surf Park, designed in partnership with its 10-time world-champion namesake, generates currents that provide surfers with rides of a full minute or longer. Waves form at the outer edge of the five-million gallon circular tank and break as they run up the pool floor, which mimics the seabed as it approaches shore. The pools may appear in such locations as resorts and theme parks, and can be scaled up or down to cater to available space. But how will the park create these waves?

In nature, wind gusts far offshore form ripples on the ocean surface. As they move toward shore, those small ripples merge into larger ones and grow into waves. To simulate that in a small area, the wave park’s designers use curved hyrdrofoils of at least 100 feet long, which rotate behind a protective fence around the pool’s perimeter and push the water toward the center of the tank. Their tapered shape creates a smooth, rolling current that flows around the approximately 0.35-mile loop. Adjusting the speed of the foils helps change the waves’ height from three-foot rollers to eight-foot barrels.

As the current travels, it hits the upward-sloping floor. The change in depth agitates the water into a swell, where it breaks into ocean-like crests that surfers who have paddled out can catch.

Along both edges of the tank, trenches absorb turbulence, making for a smoother water surface and glassier waves.

After a ride (or nasty wipeout), surfers land on a beach-encircled island, which is also accessible by bridge for spectators, to relax before their next run.