A Soccer Ball That Doubles as a Generator

At least half of the 265 million people worldwide who play soccer live in developing regions, where electricity can be... 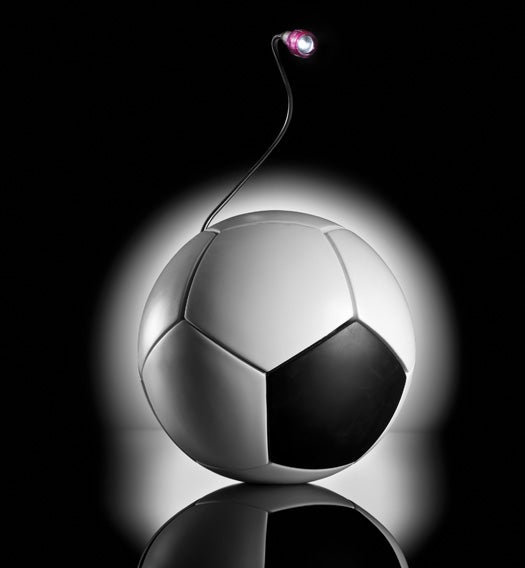 At least half of the 265 million people worldwide who play soccer live in developing regions, where electricity can be scarce. The sOccket, designed and distributed by New York–based nonprofit Uncharted Play, is a regulation-size ball that converts kicks and headers into off-the-grid power. With it, two hours of play produces enough wattage to light an LED for at least a night.

Made of durable 0.5-inch-thick watertight foam rubber instead of the typical thin leather, the sOccket retains the bounce and feel of a traditional air-filled ball while adding only six ounces of extra weight. As the ball spins, two six-inch-diameter conductive brass loops running the circumference of the inner shell move across magnetic rotors; the current induced by this motion travels through the loops to a powerconverting microchip, which saves energy in a rechargeable 3.6-volt lithium-ion battery. Included attachments, such as an LED lamp and water purifier, plug into the battery through a 35-millimeter jack hidden under a watertight door.

Four thousand donated sOcckets are already in use in five countries, including Nigeria and Haiti, and for every additional one sold in the U.S., another will be sent overseas.