For years, Chile exploited its environment to grow. Now it’s trying to save it.

Chile's environmental sacrifice zones were built to meet the world's demands for copper, lithium, and other natural riches—but at a high cost. 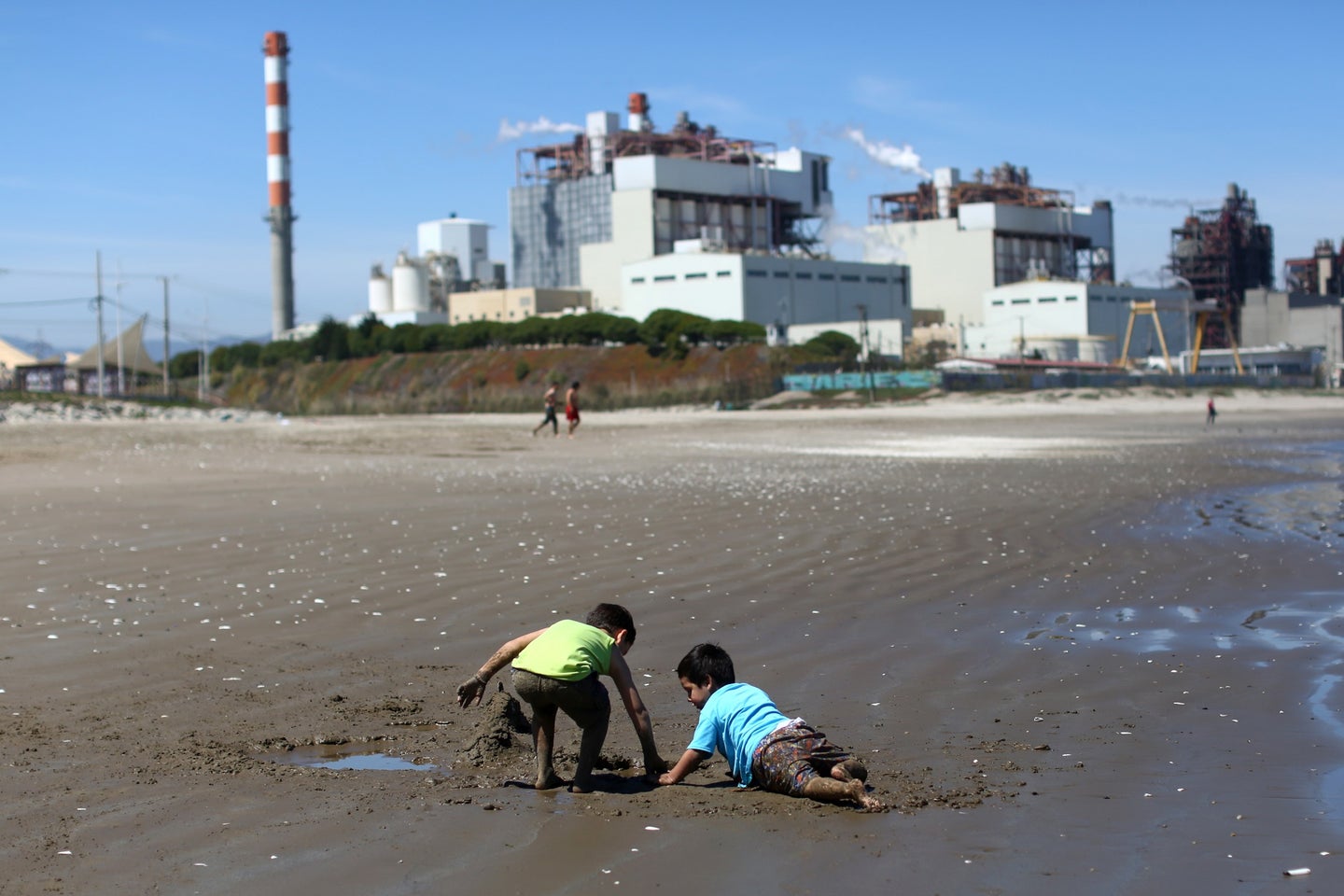 Children play in the sand at Las Ventanas beach next to the AES Gener thermoelectric plant in Puchuncavi, Valparaiso region, Chile. The Quintero-Puchuncavi has become one of the five "sacrifice zones" in Chile. PABLO VERA/AFP via Getty Images
SHARE

In August and September of 2018, hundreds of people in and around the central Chilean region of Quintero-Puchuncavi were hospitalized with symptoms of toxic gas poisoning. The two towns lie within a four-mile radius of 17 heavy industries, including copper smelting and refining, a coal-powered electricity generating plant, and an oil terminal. Today, 50,000 or so residents report dealing with chronic headaches and nausea, even when clouds of toxic gas aren’t escaping from the facilities.

Quintero-Puchuncavi is the most well-known of Chile’s five “zonas de sacrificio medioambiental,” or environmental sacrifice zones. In these areas, a concentration of historically unregulated industrial operations have resulted in negative health outcomes for the 200,000 people currently living in the affected regions, as well as damage to natural resources like water.

“The point was never to ruin these areas, or the quality of life of the people who live in them,” explains Fernando Coz, the director of the Chilean environmental nonprofit Lagos Limpios and environment and sustainability coordinator at University of California, Davis Chile. “In the ‘60s and ‘70s, the focus was on economic policy to produce jobs and move the country forward by driving development in certain zones. There was no consideration for the environment.”

In the decades since, the world has become more aware of the connection between extractive industries and environmental degradation, climate change, and frustration with social inequality. These issues are exemplified by sacrifice zones, which are regions and communities across the planet that suffer disproportionate harms from toxic pollution and heavy industrial activity. (New Orleans’ Cancer Alley fits the mold here in the US.) Now, Chile is in the process of replacing its constitution with a doctrine that could put an end to sacrifice zones and their misuse.

How this constitutional convention prioritizes climate and the environment will not just impact the 200,000 Chileans living in sacrifice zones, but the trajectory of the entire renewable energy transition, which will require a lot of lithium and copper, both of which the country has in abundance. Also at stake is the biodiversity across its many ecosystems.

[Related on PopSci+: The race to close the EV battery recycling loop]

Chile is as rich in diverse environments as it is valuable resources, including the rugged peaks of Patagonia, the world’s driest desert called the Atacama, old-growth forest, glaciers, and miles of coastline. But for much of its history, the Latin American power has struggled to steward its natural environments while capitalizing on them for economic development. The sacrifice zones mark one of the most extreme examples of that imbalance.

Chile’s five sacrifice zones date back to before the current constitution, which was written in 1980 under the dictatorship of Augusto Pinochet. The first industrial facility in Quintero-Puchuncavi was built by the national oil company ENAP in 1954.

Since then, “environmental policy and regulation have been running behind, trying to catch up with development,” Coz explains. The wealth generated from mining, chemical processing, and other extractive industries helped grow Chile’s GDP rapidly. Today, the country exports nearly a third of the world’s copper, more than any other nation. It’s the leading producer of rare minerals like rhenium, iodine, and potassium nitrate; plus, 50 percent of the planet’s lithium lies within Chile’s borders, although it only produces 23 percent of the supply bought and sold around the world each year.

The byproduct of extracting and selling those minerals—and the corresponding economic growth—has polluted soil and waterways, poisoned air, and caused illness and death in communities where corporations had free reign.

In the last few years, however, it’s started to seem like regulation might be able to catch up to industry. The environmental injustices in the sacrifice zones, and the social inequities caused by them, has pushed the country to consider new constitutional protections for nature. As global demand for Chile’s resources grows, how it will be regulated is the subject of contentious debate.

The first proposed revised constitution made the environment central in policy and the government’s decision-making, but was rejected by the people in a popular vote in early September. But sustainability experts like Coz see other avenues to making Chile’s future cleaner and more livable for its residents. After all, the constitution that’s been used for decades (with some revisions) explicitly gives people the right to a pollution-free environment. Over time, the nation’s leaders prioritized privatization and deregulation, showing that written law only goes as far as it’s enacted.

Coz is optimistic that change—and balance—is possible in his country, despite the recent downvote on the constitutional amendments. He points to the many environmental goals the federal government has already set, including transitioning to renewable energy and conserving endangered species. Just last year, it passed a new law protecting urban wetlands from development. “There has been a culture shift,” Coz says. ”Communities and citizens are saying that the environment needs to be a priority.”