As Lake Powell’s surface level continues to drop, Glen Canyon Dam may no longer be able to generate hydropower. 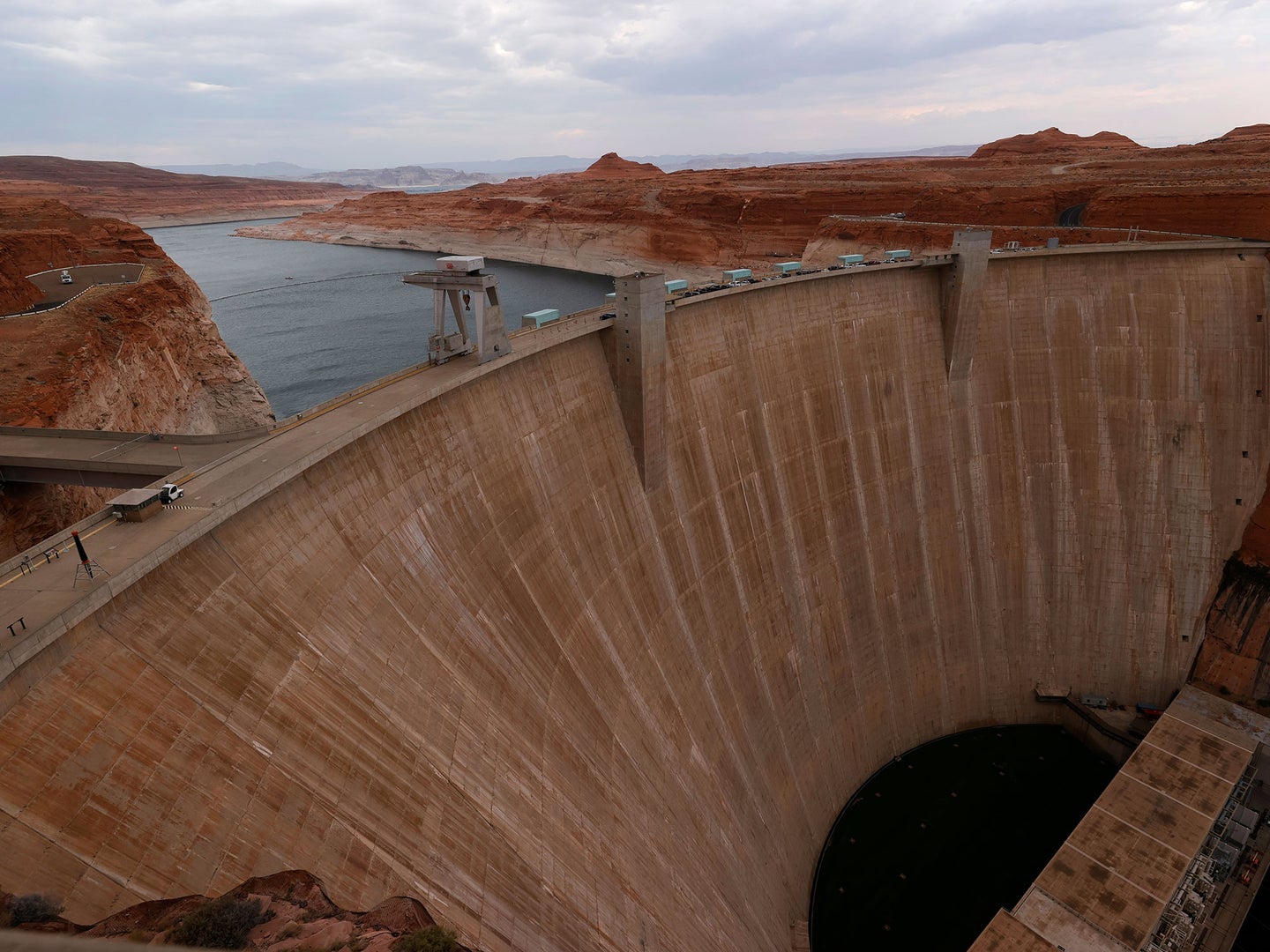 A view of the Glen Canyon Dam at Lake Powell on June 23, 2021 in Page, Arizona. Justin Sullivan/Getty Images
SHARE

Thirty-nine years ago, due to record-breaking snowfall in the Upper Colorado River Basin, Lake Powell rose substantially, catching river managers off-guard. By late June, the reservoir was nearly overflowing, forcing operators—for the first time ever—to rely on the spillways. Instead of giving relief, that precipitated a new crisis, as a phenomenon called cavitation sent shockwaves through the spillways’ innards, tearing through the concrete and then the sandstone, putting the colossal Glen Canyon Dam in peril.

The spillways were repaired, and the dam survived. But now it is threatened yet again, only this time for the opposite reason. In March, Lake Powell’s surface level dropped to within 33 feet of the minimum needed to generate hydropower, for the first time since it was filled in the 1960s. If—or when—it hits that critical point, the Southwest power grid will lose one of its biggest electricity generators, as well as an indispensable backup power source. And, it might even lead to a sort of low-water repeat of the 1983 incident.

When the reservoir is full, Glen Canyon Dam’s eight giant turbines have 1,300 megawatts of capacity, equivalent to a large coal power plant. The dam serves as a “baseload” power source, cranking out a steady stream of juice, which the federal Western Area Power Administration (WAPA) sells at below-market prices to Southwestern utilities, tribal nations and municipalities. It is also valuable as a “load-following” resource, meaning operators can ramp output up quickly to meet a spike in demand or a sudden loss of supply, contributing to grid resilience and helping to smooth fluctuations in wind and solar generation. Glen Canyon Dam was originally constructed primarily to store water during wet times and release it during dry periods. It also provides flood control, acts as a silt catchment basin for Lake Mead, and is a watercraft playground, drawing as many as 4.5 million visitors per year. But its role as a power source has risen to the top of its uses over the years.

Over the last two decades, climate change-induced drought and increasing water demand have depleted Lake Powell substantially: It is now less than one-fourth full. As water levels drop, so, too, does the potential energy of the falling water. That, in turn, lowers the turbines’ generating capacity and power output. In the 1990s, the dam produced as much as 7,000 gigawatt hours per year, enough to power nearly 600,000 homes. Last year, it was down to just 3,000 gigawatt hours.

This chronic decline in generating capacity is about to become more acute. As the reservoir approaches the 3,490-foot minimum power pool, air could get entrained in the turbine-feeding penstocks, wreaking all kinds of havoc. At that point, operators have no choice but to stop sending water through the turbines, killing power generation and depriving the grid of enough electricity annually to power about a quarter of a million Arizona homes. It would also drain between $100 million and $200 million annually from dam electricity sales, a chunk of which goes to fund endangered species recovery, salinity control and water studies on the Colorado River.

That would force WAPA to purchase more expensive power, including electricity generated from natural gas or even coal, to supply its millions of customers. The average utility customer might not even notice the dollar or two this adds to their monthly bill, but it could amount to a substantial price hike for the tribal nations that rely on WAPA for most or all of their power. The Navajo Tribal Utility Authority’s yearly power bill could jump by as much as $1.3 million, according to a 2016 consultant’s study, and nine other tribes would also see significant cost increases.

Equally worrisome is how grid operators will fill the generation void left when the dam goes offline. New wind and solar power, paired with batteries or other energy storage, can replace some or all of the baseload power. But any extra generation capacity is going to be in high demand as big coal and nuclear plants retire in the next few years. Meanwhile, solar and wind can’t follow loads like a hydroelectric dam, so utilities are likely to turn to greenhouse gas-emitting natural gas plants instead.

Over the last few months, federal officials have attempted to stave off the power plant’s obsolescence by increasing releases from upstream dams and by sending less water downstream. But that failed to buoy reservoir levels, so now they have embarked on an effort to install turbines river outlet tubes lower on the dam, which would allow hydroelectricity generation to continue below minimum power pool—for a while.

That approach brings its own challenges, however, since the tubes have only been used for short stints and were never intended for long-term use. No one knows what will happen if they become the only release valve for the reservoir’s water. Running the dam at such low levels raises a lot of “operational uncertainties,” Tanya Trujillo, the Interior Department’s assistant secretary for water and science, told attendees at a seminar last year. She even harkened back to the 1983 spillway tunnel deterioration and the resulting near-disaster. “The engineers use words like cavitation,” she said ominously, “and that gets my attention.”