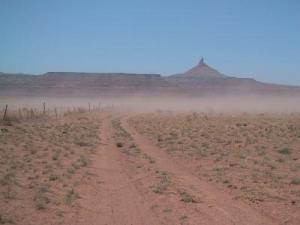 Geologists at the University of Colorado at Boulder have found that the West has become 500 percent dustier over the past two centuries. The cause? Us.

Scientists analyzed sediments in the lakebeds of Colorado’s San Juan Mountains and found that although some of the stuff traveled in from as far away as China, there was an excess of large dust particles that likely originated nearby, in the Southwest. The deposition of the fine-grained sediment has been five to seven times heavier than at any other time over the previous five millennia.

Though we think of the West as dry, it’s unlikely that that’s the cause of the trend–in fact, the scientists say that recent droughts in the area have been relatively mild compared to the historical record. Instead, the gritty air most likely stems from the rise of rail travel and the growth of the livestock industry. “There seems to be a perception that dusty conditions in the West are just the nature of the region,” says lead researcher Jason Neff of the University of Colorado. “We have shown here that the increase in dust since the 1800s is a direct result of human activity and not part of the natural system.”
Via ScienceDaily