Can a genetically engineered microbe make butanol the biofuel of the future? 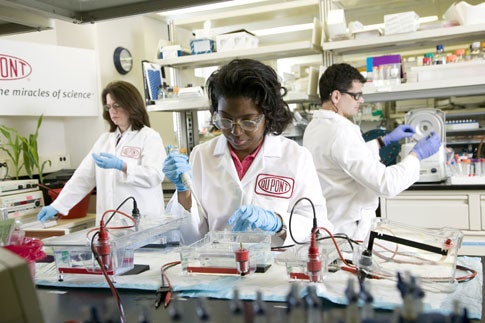 By this spring, drivers in the U.K. will encounter an unfamiliar, and unprecedented, option at the pump: gasoline blended with a corn-based alcohol called butanol. It’s part of a pilot project run by energy company BP, which aims to gauge public reaction to the new fuel. Butanol is easier to store and transport than existing biofuels and has an energy content more comparable to that of gasoline. Now, with more efficient ways to make it on the horizon, an increasing number of experts think butanol is poised to overtake ethanol as the best-selling alternative fuel on the market.

Like ethanol, butanol is a type of alcohol that’s made by fermenting sugars with microbes, such as bacteria or yeast. Most ethanol is produced from corn, wheat and sugarcane; the butanol on tap in Britain is made in China, from corn.

For now, making butanol is far less efficient than making ethanol in large part because it’s more toxic to the microbes that ferment it. As a result, every bushel of corn yields less than 2 percent butanol, versus about 12 percent for ethanol. To change that, BP has enlisted DuPont scientists to genetically engineer hardier microbes. According to John Ranieri, head of biofuels development for DuPont, this will drastically improve butanol’s yield, clearing the way for what is potentially a much more useful fuel.

Butanol has a chemical structure that provides advantages over ethanol. For instance, unlike ethanol, which is difficult to store and can corrode pipelines, butanol could make use of existing infrastructure. It could also be blended into conventional gasoline at higher rates than ethanol because of its low vapor pressure, which decreases its volatility and reduces fumes. And its higher energy content means it would provide better fuel economy than today’s biofuel of choice.

All of these advantages have made butanol a hot topic among everyone from biotech backers to Boeing, which recently partnered with Richard Branson’s Virgin Fuels to investigate the use of alternative jet fuels, including butanol blends. Gregory Stephanopoulos, a professor of chemical engineering at the Massachusetts Institute of Technology who researches biofuels, says, “The real challenge is to make organisms that can tolerate butanol.”

BP and DuPont aim to do just that by 2010. In the meantime, the companies are busy preparing for the biofuel boom, building the first-ever butanol demonstration plant, in England. By late 2009, the plant will turn out about 5,000 gallons of butanol every year, initially all from locally grown crops. Soon after, the team plans to convert an ethanol plant in the same complex.

Of course, there’s a huge market for effective alternative fuels, both to meet the growing demand for automotive fuel–expected to increase by more than 25 percent by 2030, even as traditional oil reserves are depleted–and to find fuels that release fewer greenhouse gases into the atmosphere. The Department of Energy has promised to spend more than $1 billion on biofuel research over the next few years. But although American biofuel use has more than doubled since 2003–to 5.6 billion gallons per year, or 2.6 percent of total consumption–today’s alternative fuels are far from ideal. Our ethanol and biodiesel supplies are derived completely from food crops, such as corn and soybeans. They require large amounts of land and water to grow. Far better is the possibility of producing fuels from cellulose, like cornstalks and other plant refuse.

DuPont, among others, is working on engineering enzymes that will enable that process for both ethanol and butanol. “The solutions definitely exist today to change the transportation-fuel mix,” Ranieri says, “and to do it much more quickly.”