Are cloned animals as good to eat as conventionally bred ones? 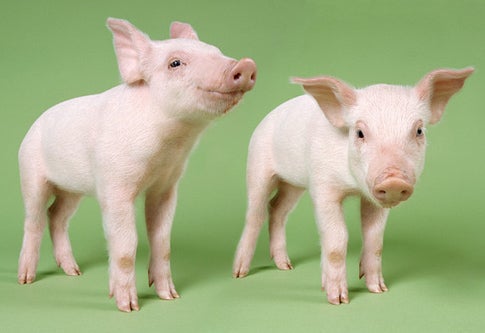 Cloning has been controversial ever since Scottish scientists announced in 1996 that they had cloned their first mammal, a sheep they named Dolly. While Dolly lived a painful, arthritic life and died prematurely, possibly due to the imperfections of cloning, industry nonetheless began seeking out ways to capitalize on the new technology. Meanwhile, critics bemoan cloning as immoral, and eating cloned meat a potential health and safety risk, given the as-yet-unknown consequences of eating foods generated in this way.

In January 2008, the U.S. Food and Drug Administration (FDA) approved the sale of cloned animals and their offspring for food, despite fierce opposition from animal welfare and consumer advocacy groups, environmental organizations, some members of Congress, and many consumers.

“Our evaluation is that the food from cloned animals is as safe as the food we eat every day,” said Stephen Sundlof, the FDA’s chief of veterinary medicine. Meanwhile, the U.S. Department of Agriculture has asked that producers withhold cloned animals, but not their offspring, from the food supply while farmers, processors, grocery stores and restaurants decide how they will respond to the FDA’s landmark decision.

Unsurprisingly, industry groups also argue that beef and milk from cloned animals is safe to consume. They cite a 2005 University of Connecticut study, which concluded that beef and milk from cloned cows did not pose any health or safety threats to people consuming it. But critics say that the oft-cited single study was far too limited to yield any meaningful conclusions: Milk and beef were taken from just six cloned animals, and the study did not take into account whether clones were more susceptible to infection or other microbial problems, as many scientists suspect. Other researchers have noted severe deformities in many cloned animals, as well as a higher incidence of reproductive, immune and other health problems.

The Washington, DC-based Center for Food Safety, in a petition it filed in late 2006, declared: “The available science shows that cloning presents serious food safety risks, animal welfare concerns, and unresolved ethical issues that require strict oversight.” The group announced on September 2, 2008, that 20 leading U.S. food producers—including Kraft Foods, General Mills, Gerber/Nestle, Campbell’s Soup and Ben and Jerry’s—had agreed not to use cloned animals in their products. “The move by these companies represents a growing industry trend of responding to consumer demand for better food safety, environmental and animal welfare standards,” the group said in making the announcement.

Given the FDA’s green light, consumers’ only hope of avoiding cloned animal products may be to appeal to businesses directly not to peddle such items. The Pennsylvania-based American Anti-Vivisection Society, which opposes all forms of animal research and testing, has mounted a campaign to urge McDonald’s to forgo cloned animals in its 30,000 restaurants worldwide.