With Upgraded Fasteners for the iPhone 4, Apple Finds a New Way to Screw With Inquisitive Users

If you thought Apple’s dictatorial stranglehold over the devices that you bought and paid for only extended to the company’s... 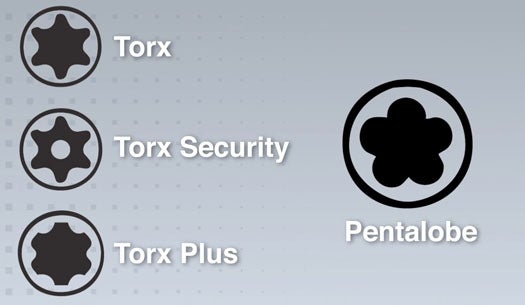 If you thought Apple’s dictatorial stranglehold over the devices that you bought and paid for only extended to the company’s vice-grip control over its operating system and its app store, think again. According to the hardware hackers over at ifixit, Apple is switching to new kind of tamper-resistant screw that aims to keep you from dismantling your iPhone or Macbook at home, ensuring that the only person who can get at the guts of your device is wearing “Genius Bar” insignia.

The new screw is similar to a Torx screw, but rather than six points it has five, and they are rounded rather than sharp. Service manuals refer to them as pentalobes (that means they’re pentalobular), and the tool that extracts them is expensive, rare, and more or less only readily available behind the repair counter at the Apple Store. See how that works?

These screws first showed up on the mid-2009 Macbook Pro apparently, and since has shown up on the Macbook Air and in several non-U.S. iPhone 4 editions. New editions of the iPhone 4 will have them as well, and—and this is the real icing on the cake—if you take your phone to Apple for service, they will replace your standard screws with the new pentalobular versions, reportedly even if the service you require doesn’t require the screws to be removed.

In other words, Apple doesn’t want you to be able to modify your phone in any way without the company’s explicit permission and oversight (and a nominal service fee).

What will save us from this kind of technological tyranny? One thought generated at PopSCi HQ: more technology. Such “security” shenanigans may soon be rendered obsolete by technologies like 3-D printing, which would allow tinkerers to scan the shape of a screw head into their workbench console and quickly custom-print the proper tool for any task. Until then, ifixit will happily sell you a rather inexpensive iPhone 4 Liberation Kit.

Apple’s Diabolical Plan to Screw your iPhone from iFixit on Vimeo.