Smelting in a Microwave

Our scientist zaps tin and silver, shatters glass, and arcs his oven to prove a point.

There is an entire subculture of people who derive pleasure from putting strange things in microwave ovens, things that microwave oven manufacturers would most strenuously suggest should not be put there. In the hands of these people, table grapes produce glowing plasmas, soap bars mutate into abominable soap monsters, and compact discs incandesce. As a scientist, I’m enthralled by such phenomena (particularly the grapes), but somehow I’ve always found the subject a bit unsatisfying: Cool, but what is it really good for? It wasn’t until I stumbled upon David Reid’s Web site that I discovered a much more intriguing possibility for a microwave: melting metal.

I know, I know: You’ve been warned never to put metal in a microwave. There is some merit to this notion, particularly when it comes to food–metal reflects microwaves and prevents them from reaching the thing you’re trying to heat. Microwaves also can ruin metal accents on fine china and can initiate electric arcs across some metals, which oven-makers consider a fire danger.

Nonetheless, I recently found myself inspired to attempt microwave metal melting–and, for reasons too complicated to explain, the inspiration struck on a visit to San Francisco. I was 1,500 miles from my Illinois workshop and without any of the required materials: a challenge! From a hardware store on Fourth Street, I bought a silicon carbide sharpening stone and 3 pounds of tin/silver plumber’s solder; from Macy’s, I purchased a microwave-safe casserole dish and a stainless-steel measuring cup; and at Williams-Sonoma, I found a cute cast-iron cornbread fish mold and a pair of long-cuff leather grilling gloves.

Silicon carbide is a microwave susceptor: It absorbs microwaves and turns them into heat (as does food, but silicon carbide can withstand much higher temperatures than your average turkey sandwich). The measuring cup sits on the stone, which heats it, and the solder it contains, from below. The casserole dish traps the heat, allowing it to build up to the tin’s melting point (220� 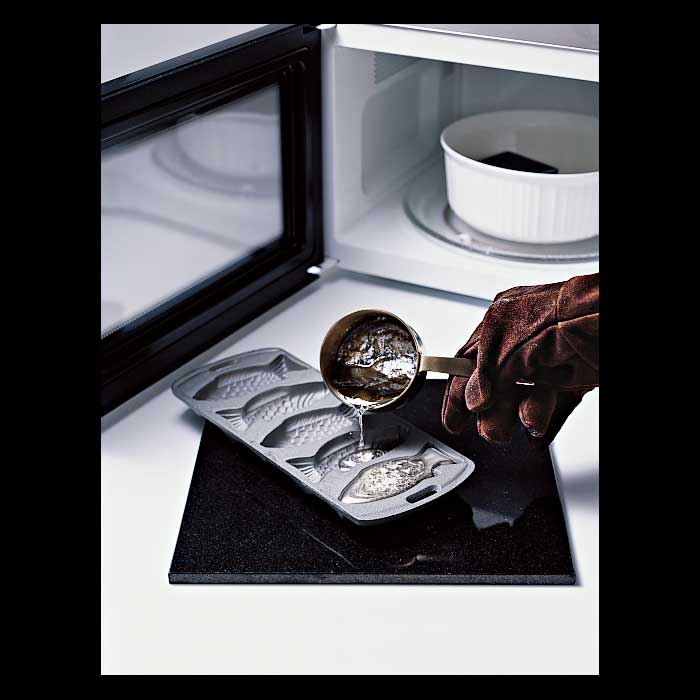 Molten tin solder is poured into a fish mold. 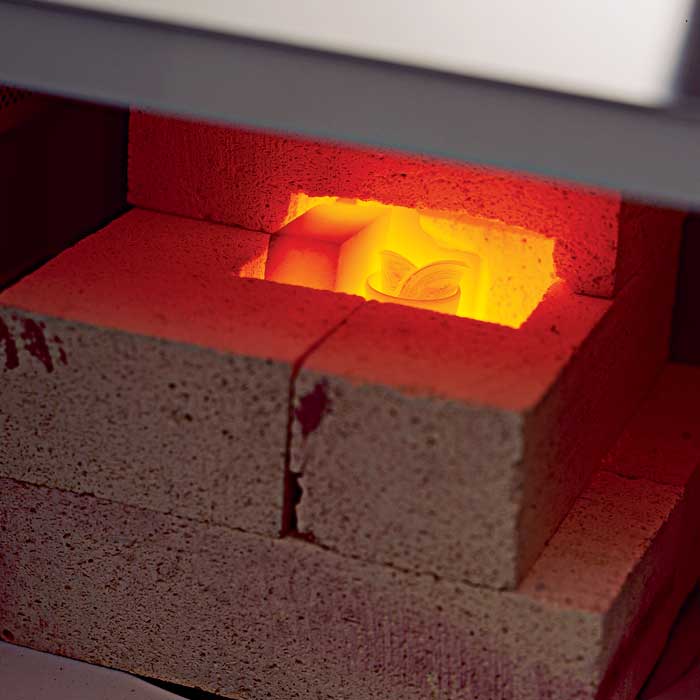 After building a furnace enclosure out of firebricks and silicon carbide (shown), Gray made silver glow red at about 800�°C, slightly below its melting point.
Projects
silicon carbide