Ford’s Smart Brakes Light Up Dashboard Of Car Behind You

The system would alert drivers even if they couldn't actually see the car ahead, preventing pileups. 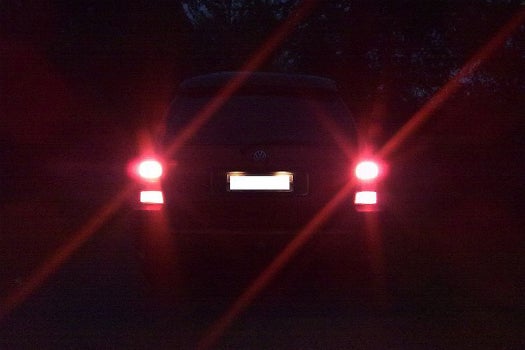 Say you’re taking a romantic, winding drive through the mountains. The car in front of you at some point might disappear around a corner. It might also encounter a family of adorable baby quail scurrying across the road just beyond the bend, and decide to slow to a stop to avoid them. You didn’t expect them to hit the brakes anytime soon—it’s not like their car bore a bumper sticker proclaiming “I Brake For Quail”—so you tear around the bend with wild abandon, and promptly rear-end them.

Brake lights are an easy way to tell that a car in your path is decelerating, but if you can’t see them, they’re useless. A blinding sunset, a thick blanket of fog or a sharp turn might obscure your view, putting you and other drivers at risk for a pileup. But what if your car knew another vehicle was braking before you could see it?

Ford’s experimental “Electronic Brake Light” uses wireless signaling to light up the dashboard of a car when the vehicle in front of it hits the brakes. Over the course of field testing last year in Frankfurt, Germany, Ford found this kind of car-to-car communication could allow drivers to brake faster in reaction to the car in front of them. The company hasn’t provided many details about how exactly this all works, but presumably both cars would need to be equipped with the system. The setup could also probably alert drivers to deceleration even when a physical brake light has gone out.

It doesn’t seem like this system will brake for you, like Volvo’s cyclist-detection system does. However, Europe has already taken steps to ensure all new cars feature autonomous emergency braking (AEB) technology by later this year.

Ford’s car-to-car braking communication, tested as part of the industry research project Safe Intelligent Mobility–Testfield Germany (simTD), might be far from actually hitting the market, though. The file tests, with 500 drivers and 120 vehicles, ended in 2012, and there isn’t an indication of when things like the Electronic Brake Light would be available for consumers.