In Which We Examine the Value of Trains and Cars

In eastern Kansas, our route took us parallel to a major east-west train track for many miles. Long freight trains... 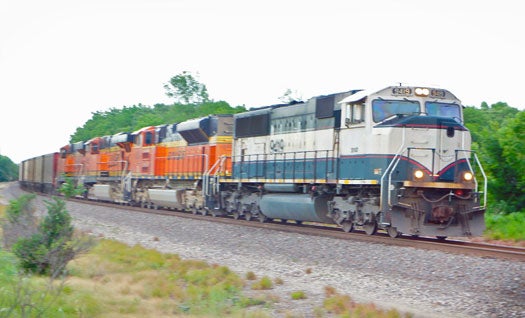 While passing a train in eastern Kansas, Pierce and Nash debate the future of energy efficient transportation, and discover that freight trains like this can be quite fuel efficient on a ton-per-mile basis. Pierce Hoover, taken with the Sony NEX-5
SHARE

In eastern Kansas, our route took us parallel to a major east-west train track for many miles. Long freight trains passed us every few minutes. My son Nash enjoyed the spectacle, and asserted that we were seeing a much more efficient mode of transportation than cars or trucks. He likely formed this opinion after seeing an ad campaign from one of the major rail lines that touted the efficiency of rail transport on a per mile/per ton basis. With hours of free time for discussion while rolling along at 15 mph, we spent some time debating the future of transportation.

Having been to Europe and a number of major US cities that offered good mass transit systems, he argued that cars and trucks should eventually become a thing of the past; replaced by new rail lines, subways and buses that offered more fuel-efficient means of transport. I didn’t fully share his vision, not only based on logistics, but also on the assumption that personal automobiles would represent a glaringly inefficient option. There’s no arguing that a line of single-passenger SUVs stalled in rush hour gridlock is a monumental waste of fuel and time. But attempting to link many of our nation’s decentralized metropolitan and rural areas by mass transit would require an unrealistic investment in infrastructure, and might not be any more efficient.

Later, when we stopped at a small town library for a mid-day rest stop. I spent a bit of time on the Internet and discovered some interesting facts on trains. Freight trains can be quite fuel efficient on a ton-per-mile basis. But because passenger trains carry a much lighter human cargo within a large, heavy car, they don’t realize the same efficiencies. The primary advantage of human train travel, it seems, is to relieve road traffic, and they make the most sense when moving passengers in and out of centralized cities such as Manhattan, or between major metro areas. But given the way the rest of our nation has developed around the roadway and the automobile, it’s likely that many of us will be driving some sort of personal vehicle for many years to come. The day of the three-ton gas-guzzler may be numbered, but its replacement will likely be a new generation of ultra-efficient personal transportation.