Infrared Eyetracker Keeps Drivers Awake at a Fraction of the Cost

German researchers at the Fraunhofer Institute for Digital Media Technology have developed an eyetracking device that could soon help keep... 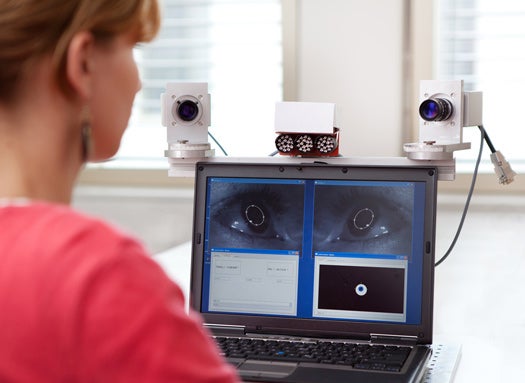 German researchers at the Fraunhofer Institute for Digital Media Technology have developed an eyetracking device that could soon help keep drowsy drivers alert on the road for a fraction of the cost of existing systems.

The Eyetracker monitors drivers’ lines of vision and issues a warning if they appear to be nodding off. After three months of in-car tests, the device will be ready for sale to auto makers, which according to Fraunhofer developer Peter Husar, could be as early as spring of next year.

The Eyetracker costs about one-tenth the price of similar devices, Husar says. These other devices also require complicated calibration to be customized to an individual’s eyes. The Eyetracker uses at least two cameras to record 3-D images and identify any driver’s line of vision without calibration. For increased accuracy, four to six modules can be installed in a vehicle in order to see the eyes in every position.

The image processing is contained within the camera modules and doesn’t require any extra hardware to analyze the 200 frames per second of video it captures. It works with infrared light, so if you start to fall asleep on dimly lit back roads, the Eyetracker is still alert and active. Considering that 62 percent of Americans have reported driving while drowsy, this device could help make those tired morning commutes a little safer.