It didn’t take Japan’s battery-powered Mira EV long to top itself. Last year the car set a record for the... 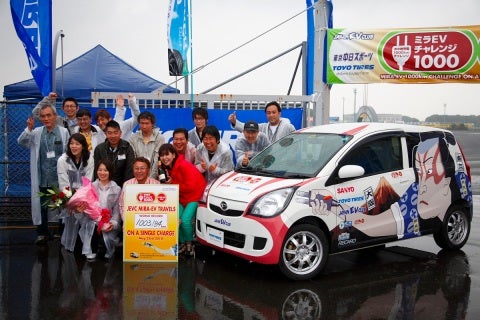 It didn’t take Japan’s battery-powered Mira EV long to top itself. Last year the car set a record for the longest journey in an electric car without recharging, traveling 345.2 miles between Tokyo and Osaka on a single charge. Packing 8,320 cylindrical lithium-ion batteries, the Japan EV Club’s Mira EV has now bested its own short-lived record, traveling 623.3 miles on a single charge this past weekend.

The Sanyo batteries packed into the Mira are the same as those typically used in laptops and other common mobile technology. At a track in Ibaraki, Japan, the Japan Electric Vehicle Club oversaw the trial, which effectively doubled the previous record over the course of more than 22 hours.

During that marathon the car averaged a not-so-practical 30 miles per hour, so don’t go converting your ride to laptop power just yet. While Mira’s progress deserves applause, it has by no means solved the problems inherent in EV transportation, most notably the power/range tradeoff. What the Mira EV really proved this weekend is that with some smart thinking and a little tinkering, the Japan EV Club was able to coax nearly twice the range out of the same car using the same number of batteries in just a few months time. That’s serious improvement.

Technically speaking, the Mira EV’s previous record stood for only a month, as the Guinness Book of World Records didn’t officially recognize last autumn’s record-setting journey until April of this year. Which means while the Mira EV might not be breaking any land speed records, its pace of development is pretty impressive.