With gas prices going through the roof, yesterday's jalopy could be today's blue-chip used ride 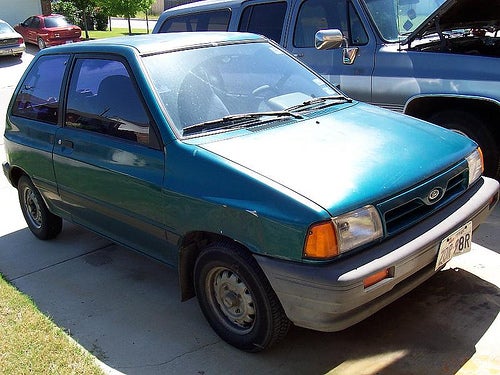 A rust-dappled Hyundai for $3,000, a clapped-out Geo Metro for $5,000, and a censurable Ford Festiva for six grand? Welcome to upside-down world. The rising price of dinosaur champagne has already decimated the large-SUV business, and now the realities of gasoline economics are elevating what was once the lowliest segment of the used-car market into Croesus’ territory.

The last surviving economy cars from the early 1990s, whose light weight and efficient engines could, when new, deliver fuel economy in the 50 mpg range, are appreciating rapidly as cash-strapped buyers stalk eBay and Craigslist for well-cared-for examples. The price-appreciation of such cars is as shocking as the rise in gas prices, rocketing from around $1,000 a few months ago to five or six times that today, according to US News and World Report.

But are these cars worth the increase, or are they just a panic buy? Remember a few things: Those early cars don’t have the safety ratings of newer cars. Also, since those cars were new the EPA has changed the formula with which it calculates fuel efficiency. That means the high EPS number on the original sticker will mean something more like 30 now—less if it’s not in perfect running shape. Not bad, but not far off what a newer, safer economy car would get. Still, anyone with an old hatchback in running condition may be going on vacation this year after all.

[via US News and World Report]