GM Ropes in 50 Cent for its Odd Unveiling 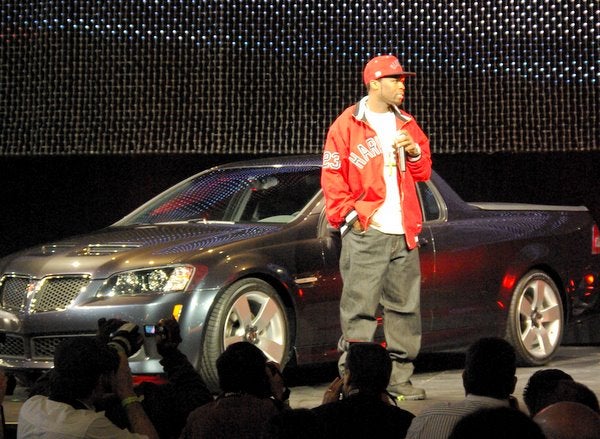 The long awaited Pontiac El Camino–I mean, the Pontiac G8 Sport Truck–arrived this morning at the New York Auto Show in what might be the most amusingly schizophrenic press conference in history.

First GM chairman Bob Lutz took the stage and poked fun at the brand he was there to reintroduce. “We used to say ‘We Build Excitement,’ then give you a four-cylinder Grand Am.” Then he unveiled three new rear-wheel drive Pontiac performance cars: The Solstice Coupe, the G8 GXP, and the G8 Sport Truck, which actually doesn’t have an official name yet; Pontiac is soliciting ideas from the public on its Web site.

For today, though, the Sport Truck shall be called the Curtis. That’s according to 50 Cent, the rapper formerly known as Curtis James Jackson III, who next took the stage and stumbled through a few lines about the performance figures on each car. Which are pretty impressive: The G8 GXP will come with a manual transmission and run from 0 to 60 in less than five seconds. And, according to 50 Cent (it feels great to attribute this to 50 Cent), the new Soltice hardtop can match or maybe even outperform the Porsche Cayman, which sells for twice the price. As bizzarre as this unveil was, I kind of can’t wait to drive these cars.