Volkswagen's canoe-skinny mini could do New York to D.C. on 1 gallon of gas. 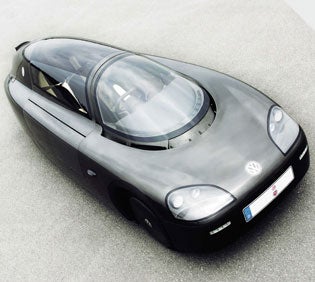 Volkswagen AG’s latest idea-on-wheels can travel more than 100 kilometers on a single liter of fuel.

To listen to automakers snipe about tightening fuel economy standards, you’d think it impossible to squeeze more miles from a barrel of Extract of Arabia. This, of course, is not the case, particularly if you design a vehicle expressly to drive far and drink little.

Forget power, space, and speed: Volkswagen AG’s latest idea-on-wheels does not address the requirements of the average American family driver. What it can do is travel more than 100 kilometers on a single liter of fuel. Translation: 235 miles per gallon.

The car’s designers combined highly tuned aerodynamics, exotic materials, and a 0.3-liter diesel engine to achieve 0.99 liters per 100 kilometers. The project, the brainchild of engineer Thomas Gnsicke, is an engineering exercise and therefore has rather whimsical features. Most noticeable are the car’s canoe-like proportions: It’s 4 feet wide and 11 feet long. Occupants sit tandem, the passenger straddling the driver’s seat, both wedged under a 4-foot-long gullwing canopy.

Three video cameras eliminate the mileage-reducing wind drag of rearview mirrors. Wheels are faired in, side-cooling air inlets open only when necessary, and even the keylocks have been replaced by a proximity unlocking system. The resulting coefficient of drag is 0.159, compared with 0.30 or so for most production cars.

The slinky carbon-fiber bodywork covering the magnesium frame is just the beginning of the unobtainium-based technology used throughout. The front suspension is a combination of titanium, aluminum, magnesium, and ceramics and weighs less than 18 pounds. The single-cylinder four-stroke engine has monoblock construction-there’s no separate cylinder head-and is all aluminum. Fuel is atomized directly into the cylinder at 28,000 psi. Two overhead camshafts operate the one exhaust and two inlet valves. The fuel pump is magnesium, the exhaust system titanium.

The engine produces a thundering 8.5 horsepower and weighs only 57 pounds. It conspires with a 6-speed gearbox-magnesium housing, hollow shafts, titanium bolts-to pinch miles from the diesel fuel. The transmission shifts electronically, killing the engine when an onboard computer foresees an inkling of fuel savings. A starter-generator, with energy stored in nickel-metal batteries, rekindles the engine as necessary.

Because the electric motor only restarts the engine, the 1-liter car is not a hybrid. Gnsicke explains that if fuel economy wasn’t paramount, the motor could be used to increase horsepower and torque by 30 percent. “But that’s not the effect we wanted.” In fact, he’s not terribly specific about performance, other than to say that top speed exceeds 70 mph and that it’s “not very quick in accelerating.”

It can, he promises, “swim with the usual traffic.” Who better to emphasize that point than Ferdinand Pich, chairman of VW? For the most recent board meeting in April, Pich drove the 1-liter car from Wolfsburg to Hamburg, 110 miles, averaging 264 miles per gallon on the way. That works out to an ultra-miserly 0.89 liters per 100 kilometers.

SIZING UP THE SMALL FRIES

How VW’s 1-liter machine stacks up against the shortest-wheelbase vehicle on American roads today, the Mazda Miata.