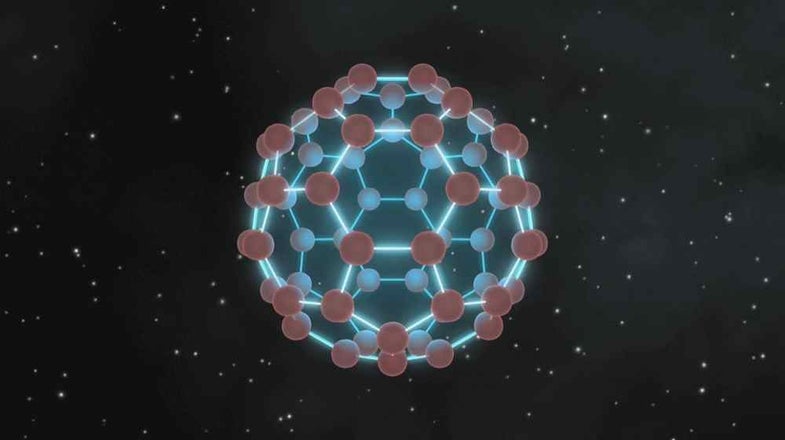 There are buckyballs floating around in space! Not to be confused with toy magnets, buckyballs are soccer-ball-shaped molecules made up of 60 carbon atoms, affectionately named for their resemblance to the geodesic dome designs of Buckminster Fuller.

In a paper published this week in Nature, researchers announced that they had identified strange signals in space as a sign that buckyballs were floating in the middle of nowhere.

This isn’t the first time that buckyballs have been spotted in otherworldly locations. Researchers using the Spitzer telescope first spotted buckyballs in a nebula five years ago, and a vast quantity of them circling two stars in 2012.

But unlike those, these buckyballs were identified as the culprit in a nearly century-long whodunnit. As Nature News reports, astronomer Mary Lea Heger first noticed odd variations in light coming through interstellar space in 1919. Astronomers assumed these variations, called diffuse interstellar bands were caused by dust, or other tiny space detritus. But at least two of these bands, first spotted in 1994, are a match for buckyballs examined in space-like conditions.

To make the positive identification, scientists cooled buckyballs in a lab to nearly absolute zero, placed them in a vacuum, and shone light through them. The light passing through the buckyballs in the lab was a match for the light seen through telescopes.