Where Is This Comet’s Tail? 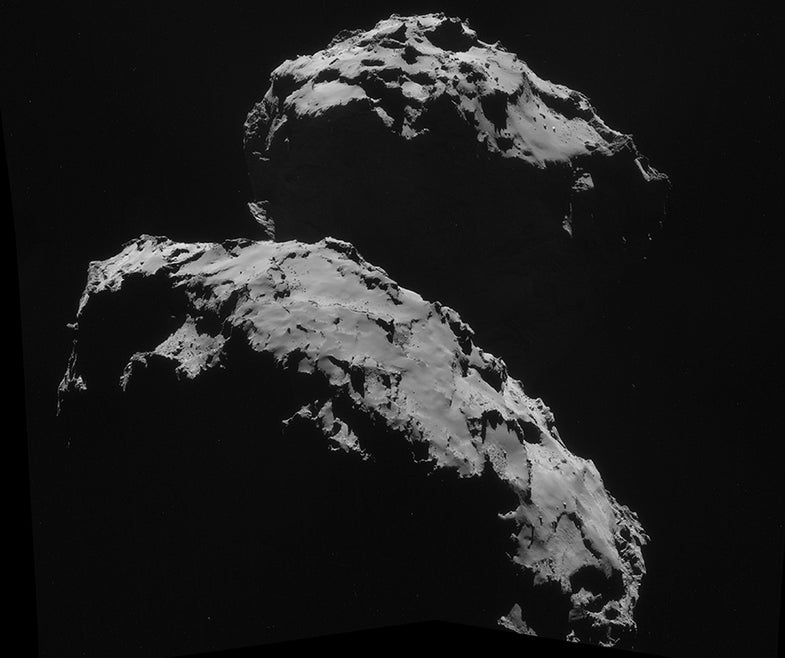 Here’s a refresher from middle school science class: An asteroid is a huge rock tumbling through the solar system, and that’s pretty much all it looks like–a big rock. Meanwhile, a comet is a ball of ice and dust that has a long bright tail, which is caused by the Sun blasting that ice and dust off of the comet’s surface as it zooms around.

The European Space Agency’s Rosetta mission has sent back some amazing photos as it approaches comet 67P/Churyumov-Gerasimenko and prepares to land on its surface. But we have a question: Where’s the tail?

Gerhard Schwehm, former manager of the Rosetta mission, tells Popular Science that the tail as we see it from Earth looks very different up close. “It’s like being in fog,” he says.

Looking at a foggy city from far away, the buildings can seem smothered in a thick gray cloud. But walk the streets and it’s a different story. Clouds of particles can reflect and refract a great deal of light over long distances while still being completely transparent up close.

In a comet’s case, the cloud isn’t very thick at all.

“We’re talking about fewer dust particles than are in the room with you right now,” Dr. Schwehm says. “If the Sun comes in in a bright beam you can see them, but it’s not that thick.”

Comet 67P’s tail will become thicker as it moves closer to the Sun in the next several months, but it will never grow to a thick obscuring cloud. Instead, larger chunks will increasingly be visible on camera, beginning around the neck, or narrowest point on the comet. Rosetta will analyze those dust and ice clouds, to better understand how the comet formed.