A dozen of the leaks were found to be potentially explosive. 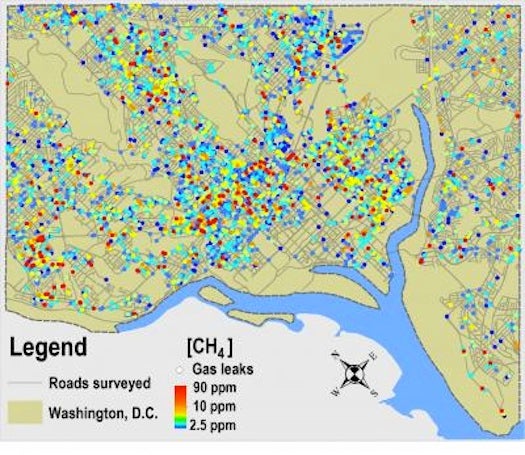 This is not exactly comforting for residents of Washington, D.C.: a new study found 5,893 natural gas leaks under the city’s streets. In a dozen cases, methane concentrations were found to be as high as 500,000 parts per million, which is about 10 times greater than the threshold at which explosions can occur, according to a statement from Duke University.

“If you dropped a cigarette down a manhole … it could have blown up,” Robert Jackson, professor of environmental sciences at Duke who led the study, told USA Today. “I was shocked.”

The scientists sniffed out the leaks “under all 1,500 road miles within Washington using a high-precision Picarro G2301 Cavity Ring-Down Spectrometer installed in a GPS-equipped car,” the statement noted. Tests on the chemical composition of the methane then confirmed that it matched the signature of methane from the pipeline. When high methane concentrations were detected with the spectrometer, further tests were carried out with sensors lowered into manholes.

The local utility, Washington Gas, told USA Today it responded to all reports of gas leaks; Betty Ann Kane, who chairs the D.C. Public Service Commission, said findings could mistakenly alarm residents and that there hasn’t been an accident or explosion from a pipeline leak in the area for at least 20 years. However, four months after notifying city authorities about the 12 worst leaks, scientists returned to find that eight were still emitting potentially explosive levels of methane, according to the Washington Post.

The study was published today (Jan. 16) in the journal Environmental Science & Technology.