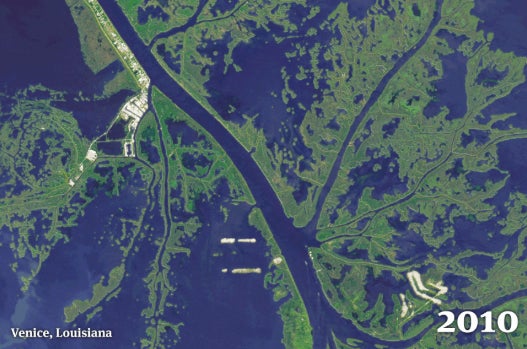 An unholy trinity of forces – levees along the Mississippi River, sea level rise due to climate change, and fossil fuel extraction – have caused about 2,000 square miles of southeastern Louisiana to disappear into the Gulf of Mexico over the past eight decades. That’s according to Losing Ground, a multimedia journalism collaboration between ProPublica and The Lens, offers an interactive, thorough, and thoroughly sobering look at it, with layered maps and satellite images, impressive photographs and first-person audio.

As Losing Ground reports, southeastern Louisiana continues to drown at the rate of about one football field an hour, adding up to 16 square miles annually. The wetlands and the species that depend upon them are already failing in many locations and local communities have fallen apart. As well, Southeastern Louisiana supplies much of our domestic wild seafood, and contains “half of the country’s oil refineries, a matrix of pipelines that serve 90 percent of the nation’s offshore energy production and 30 percent of its total oil and gas supply, a port vital to 31 states, and 2 million people who would need to find other places to live.”

Local pols and the public largely shrugged off coastal land loss in Louisiana for years. Then came Hurricane Katrina. The shock of that storm finally propelled the state legislature to enact comprehensive coastal restoration in 2007, as Losing Ground notes: a $50 billion, 50-year master plan that would include attempting to undo many of the past century’s ecological injuries.

So far the plan is unfunded, however, and significant unknowns — such as how much the sea level will rise in the next several decades — could undermine its success if or when it gets underway.