Audi Traffic Light Recognition Could Save Time And Fuel

The new system tells drivers when a light is about to change. 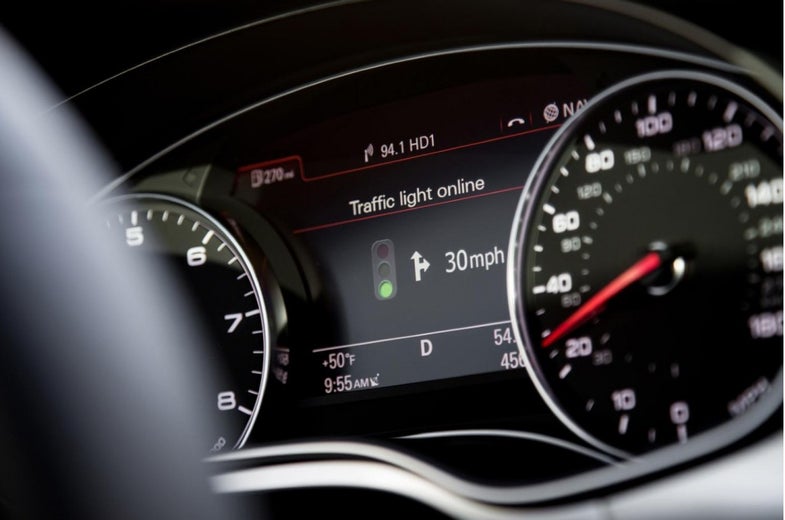 Soon, cars may pay more attention to their surroundings than drivers. No one likes to get stuck behind an oblivious person that doesn’t notice when a light changes, so Audi came up with a technological solution.

The Audi Online traffic light recognition system could save fuel as well as annoyance, by allowing drivers to anticipate changing lights. The system works by reading the automated signals from a city’s central traffic computer, and transmitting that information to the driver through the car’s Driver Information Display.

At a red light, the system can count down the time remaining until a change to green, as well as prime an engine start-stop system to restart the engine five seconds before that. While on the move, it can also sense whether a car will be able to make it through a green light and–if not–advises the driver to start braking early, preventing abrupt stops.

Audi believes this technology could save significant quantities of fuel in city driving, where the constant start-and-stop nature of traffic can hurt mpg. It could also help smooth the flow of traffic, which would make everyone’s morning commute easier.

Audi is currently testing traffic light recognition in Berlin, Las Vegas, and Verona, but says the system is production ready, pending government approval. It said a U.S. launch is the subject of “intense analysis,” but did not reveal an on-sale date.

This article, written by Stephen Edelstein, was originally published on Motor Authority, a publishing partner of Popular Science. Follow Motor Authority on Facebook, Twitter, and Google+.

Proposal: Buy Out, Shut Down U.S. Coal Industry For $50 Billion