Jacob Ward, editor-in-chief of Popular Science, has some questions about humanoid rescue robots. 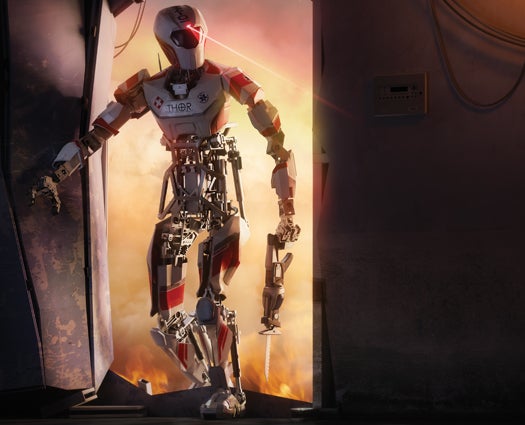 In 2010, I had the pleasure of writing our cover story about CHARLI-L, the first bipedal, self-contained robot built in the United States. It was rickety, cheap, and extraordinary. Engineering such a thing is incredibly hard.

Dennis Hong and his team at Virginia Tech were working from the premise that the best way to adapt a robot to a human environment is to mimic the human form. That way it can reach our cabinets and move fluidly through our homes. Now Hong and his team are trying to make something far more complex. This December, as you’ll read in our cover story, CHARLI-L’s descendant, a bulked-up, ruggedized prototype called THOR, will attempt the eight disaster-response tasks that make up the DARPA Robotics Challenge. No humanoid has managed these tasks before. Few can even wobble around a flat, stable surface. The idea that a robot is going to wield a saw or drive a truck next year is, well, audacious.

And another thing: If I’m lying there with a burning ceiling beam across my broken leg, will I be relieved when a humanoid robot reaches through the smoke for me, or will it drive me into shock? Stanford’s Clifford Nass, who received NSF funding to study this very thing, says that he and Robin Murphy of Texas A&M are weighing, for instance, whether it’s more comforting when the robot is a proxy for a human rescuer (“Hello, I’m controlling this robot from a block away”) or whether the robot should be itself (“Hello, I’m THOR!”).

But hey. Whatever form the winner of the DARPA challenge takes, I’m just glad that someone’s building a robot that goes where human rescuers can’t. When I need to be carried out of the inferno, I bet I won’t care what shape the arms are.

Go here to read the February issue of Popular Science.

february 2013
letter from the editor
print
Science and Technology Videos