Scientific papers are faked sometimes. That’s obviously dangerous, especially when the researcher works for the pharmaceutical industry or has a... 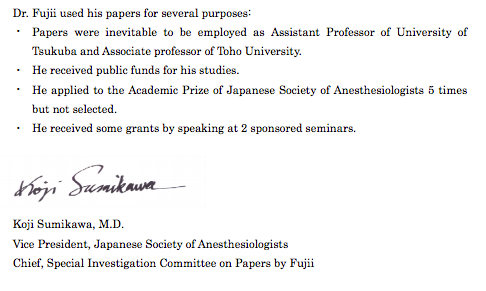 Scientific papers are faked sometimes. That’s obviously dangerous, especially when the researcher works for the pharmaceutical industry or has a clear agenda. But we’ve never seen anything quite like this: a Japanese anesthesiologist named Yoshitaka Fujii has been found to have fabricated a hundred and seventy-two papers over the course of 19 years, more than even Joachim Boldt, who fabricated 90.

As reported by Science Insider, Fujii’s work included 126 instances of completely fabricated studies and trials. (Of his other work, only three papers were proven legitimate; 37 could not be proven either way.) Some scientists listed as co-authors on his work were never even consulted, and their signatures forged. Patients were invented. The whole thing is nuts. “It is as if someone sat at a desk and wrote a novel about a research idea,” wrote a panel set up by the Japanese Society of Anesthesiologists. You can read their report here.

The papers aren’t of massive public importance, which is partly how they snuck under the radar for so long. Sample titles: “Antiemetic efficacy of low-dose midazolam in patients
undergoing thyroidectomy” and “Low-dose propofol to prevent nausea and vomiting after
laparoscopic surgery.” But Fujii did personally benefit, receiving public funding, grants, and a professorship.

Read more over at Science.