Watch A Drone Land On A Robot Dog 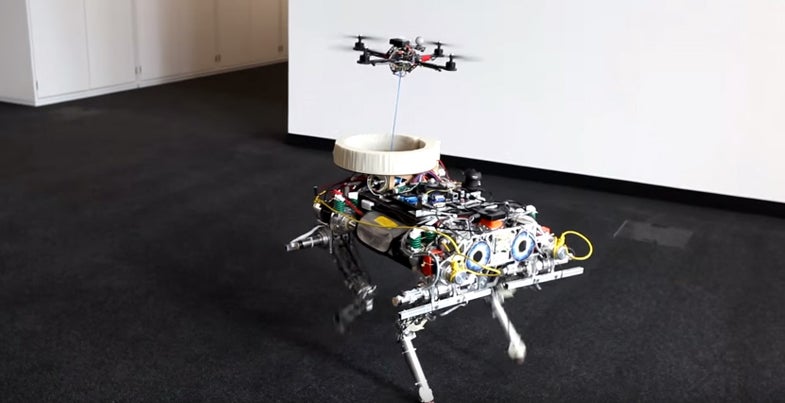 There is beauty in simple machines. StarIETH is a paired dog-like robot with a tethered quadcopter on its back, a shambling infant of a robot flying a kite or a very strong fairy pulling a pug forward. None of the individual components themselves look slick, and the movements are choppy, but the combined effect, aided in no small part by giant cartoon eyes on the robot dog, is of two machines playing together. Watch the drone land in its designated resting disk:

Here, the drone takes off, and the robot dog walks, and then the drone lands again.

While this dogbot bears a resemblance to Boston Dynamic’s BigDog, it’s a project instead of the Swiss Federal Institute of Technology Zurich, specifically their Legged Robots Autonomous Systems Lab. While this is purely a research venture, other groups have designed robot teams for rescue operations. It’s easy to see how this could be turned to rescue work: a powerful dogbot walker could crawl over rubble into a collapsed building, and then once inside a building release a quadcopter from its back to explore difficult-to-reach places.