Tropical Storm Gordon could hit hurricane status before it next hits the U.S.

The weak storm is on its way out of Florida, but it's gaining strength. 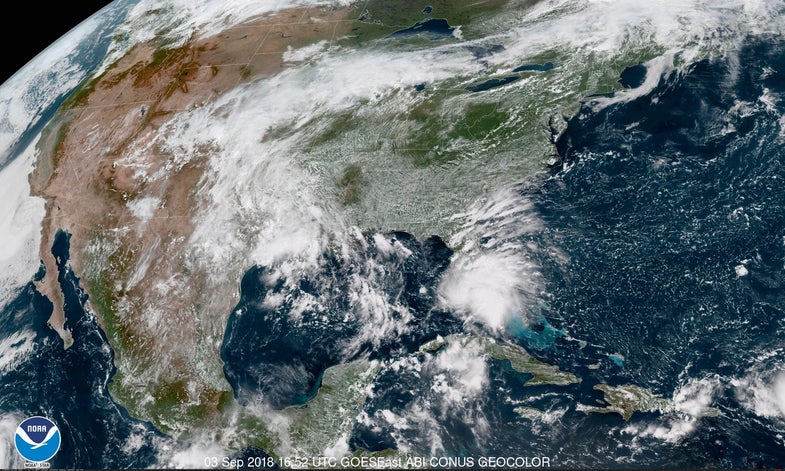 Tropical Storm Gordon’s heavy rain and gusty winds are raking across southern Florida on this Labor Day as the system makes its way into the Gulf of Mexico. According to the National Hurricane Center’s latest forecast, this weak tropical storm will slowly grow more organized as it moves toward the northern Gulf Coast on Tuesday, eventually making landfall somewhere between New Orleans, LA and Mobile, AL. By the time it arrives, Gordon could be on the verge of hurricane-level strength. The tropical storm appeared to develop and eye and start strengthening as soon as it moved off the Florida Peninsula on Monday afternoon. This is a sign that the storm may ramp-up faster than anticipated, which would increase the chances for strong winds and a storm surge along the northern Gulf Coast.

So often in recent years we’ve seen storms enter the Gulf of Mexico with a giant question mark on their eventual tracks thanks to a variety of complex factors in the surrounding atmosphere, but the environment steering Gordon is pretty straightforward. A strong ridge of high pressure over the Mid-Atlantic and the Southeast will move the tropical storm directly into the northern Gulf Coast. The only real question is which communities will get the strongest winds and heaviest rain.

The tropical storm will likely make landfall on the Mississippi coast on Tuesday afternoon or evening with winds approaching hurricane strength, and a hurricane watch is in effect for the Mississippi and Alabama coasts just in case. Regardless of the storm’s status, strong wind gusts could easily knock down trees and power lines, leaving behind a mess similar to a severe thunderstorm on any other summer day.

And no matter what its strength is, heavy rain and flooding will be the greatest threat when the storm. makes landfall. A general swath of three to six inches of rain is possible along the track of the storm and its remnants from Louisiana and Mississippi northwestward through Oklahoma. The good news is that, unlike so many of the problematic storms we’ve seen approach the Gulf Coast in recent years, Tropical Storm Gordon should keep moving as it makes landfall.

Tropical Storm Gordon’s continued forward motion prevents heavy rain from lingering over the same spots for too long. Tropical systems stalling-out for days on end trigger flooding catastrophes like we saw with Hurricane Harvey in 2017 and Tropical Storm Allison in 2001.

However, despite Tropical Storm Gordon’s anticipated forward march, any training bands of thunderstorms—that is, lines of thunderstorms that rain on the same towns over and over again—could lead to precipitation totals much higher than currently forecast, and that in turn could lead to flash flooding. It doesn’t take a widespread flooding disaster to make a tragedy; flooded homes and careless driving can turn even weak storms into disasters. Folks in the region should keep a close eye on the forecast and take precautions.