There’s hot gas between galaxy clusters because they keep banging 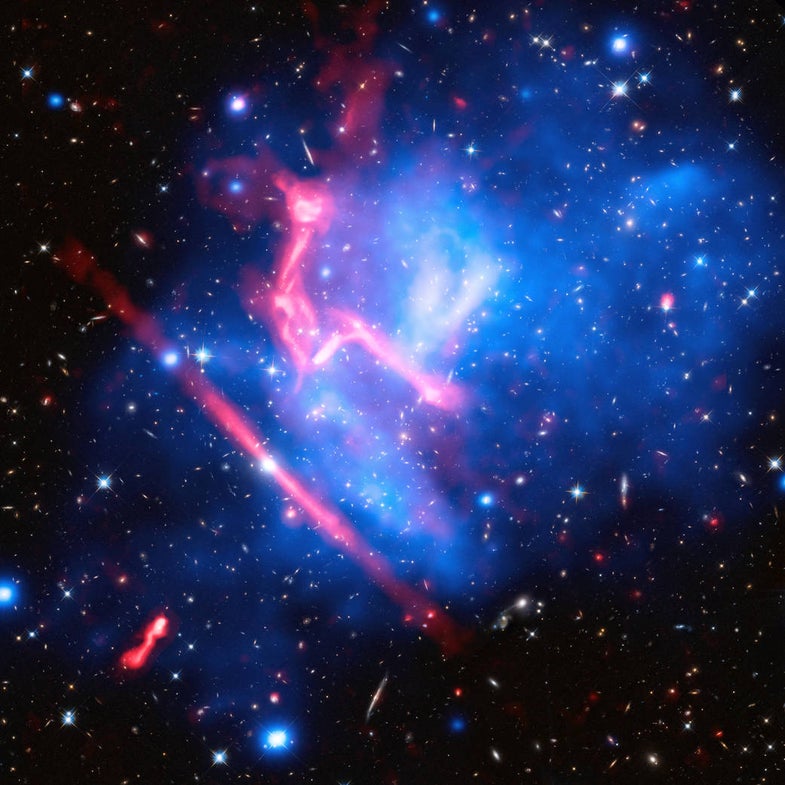 This galaxy cluster, named MACS J0717, is one of the most complex clusters yet observed according to NASA. It formed after a collision between four star clusters. X-ray: NASA/CXC/SAO/van Weeren et al.; Optical: NASA/STScI; Radio: NSF/NRAO/VLA
SHARE

Sometimes, when two galaxy clusters love each other very, very much, they create an incredibly hot pocket of turbulent space gas. Okay, so love doesn’t actually have much to do with it: throughout the mostly-empty-space of the universe, there are little (relatively speaking) clusters of galaxies that stick together. Sometimes, fate brings two of those clusters into a multi-galactic collision. According to new research presented at the 230th Meeting of the American Astronomical Society in Austin, Texas, some of these pairings bang together so hard as to create a layer of roiling gasses between them.

“Energetically speaking, galaxy cluster merging events are the biggest bangs in the universe since the Big Bang,” University of Colorado Boulder’s Jack Burns said in a statement. “These are massive, very dynamic systems that continue to evolve to this day.”

Burns and his colleagues used the NASA Ames Research Center supercomputer to churn out temperature maps of Abell 115, a large cluster resulting from the union of two smaller galaxy groupings located around 2.4 billion light years away. According to that data, the two original clusters have a pocket of incredibly hot gas—like, 10 times hotter than the core of our sun, hot—layered between them.

“We think the turbulence is like a big spoon stirring up gases, converting the energy of motion from the merging clusters into thermal energy,” Burns said. “It is a manifestation of them banging together like two giant pots, something we have not really seen before.”

The cores of the two clusters are only about a third as hot as that 300 million degree F gas, and the researchers believe they’ll eventually “relax” and become “relatively boring compared to what we are seeing now.” No galaxy cluster merger can stay sizzling forever.