In an ongoing fight against spam callers and texters, the FCC is considering a ban at the network level and requiring ID authentication. 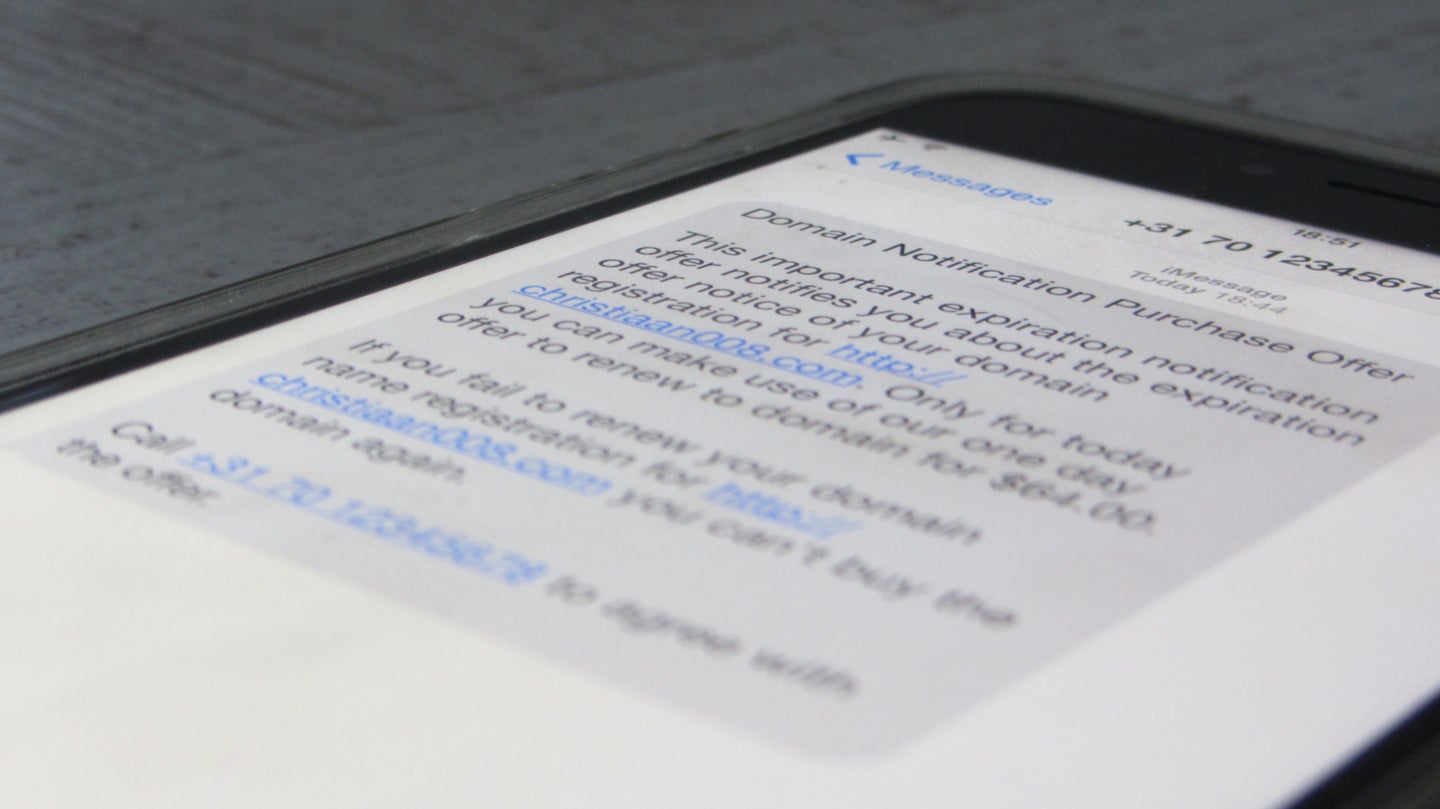 You might start seeing less of those annoying spam text messages asking you to call a mysterious number or click a link for a shopping deal, if a new proposal from the Federal Communications Commission gets approved. The FCC announced in a statement on Monday that acting chairwoman Jessica Rosenworcel and colleagues are proposing new rules that may require mobile phone carriers to block illegal spam texts from reaching their customers.

“As the FCC continues to combat unwanted robocalls, it recognizes that it must adapt to the latest scamming trends— including the rise of robotexts,” the FCC said in a statement, adding that they received around 14,000 consumer complaints about unwanted text messages in 2020 alone—nearly a 146 percent increase from the year prior. And in 2021, the Commission has already reported more than 9,800 complaints about spam texts. During COVID-19, for example, the FCC warned against package delivery notification scam calls and texts.

“Enough with the bogus robotexts that try to trick consumers to share sensitive information and click on malicious links,” Rosenworcel wrote in a tweet Monday. “I’ve asked my FCC colleagues to change our policies so we can kick this fraud off devices and stop these texts before they cause harm.”

The proposal, which would be adopted if it received a full vote from the Commission, would explore different approaches to protect consumers from illegal robotexts, including having mobile carriers block these texts at the network level, and using caller ID authentication on messages.

While this proposal is in regards to texts, federal authorities have been fighting against robocalls since 2009, according to the US Public Interest Research Group. That year, the Federal Trade Commission made pre-recorded telemarketing calls illegal. In 2016, AT&T, Apple, Comcast, Google, Verizon, along with dozens of other technology and communications companies, agreed to work with the FCC to crack down on robocalls, Reuters reported.

The FTC wrote in February that consumers reported losing nearly $3.3 billion to frauds in 2020, with phone calls and text messages listed as the top ways scammers are reaching them.

In recent years, the Commission has spent over $450 million to enforce legal actions against telemarketers. This year especially, the FCC is doubling down on its efforts to prevent robocalls and texts from entering the US phone networks. In June, the Commission mandated that phone companies such as AT&T, Verizon and T-Mobile use caller ID authentication to identify who’s calling you, and in September, the Commission announced that calls from numbers not listed in its Robocall Mitigation Database will now be blocked on US phone networks.

But scammers are tricky to stop. And not even 911 call centers are safe from phone scammers. “It’s a game of Whac-A-Mole,” Paul Schmitt, a research computer scientist at the University of Southern California’s Information Sciences Institute, told CNBC in September. “Robocallers will find other ways to do what they want to do.” Further, CNBC said that “robocalls reel in billions of dollars in profits every year.”

[Related: The FCC wants to know if you’re paying too much for internet access]

Tejas Narechania, faculty director at the Berkeley Center for Law & Technology, says via email that while this new proposal is a good start, “we’ve seen in the robocall context that this is a hard issue to address.”

He notes that it will be key to look for the regulatory details around these new rules and how they will be implemented. “The rules propose things like authentication standards, that we’re starting to see implemented in the robocall context, and that have started to have some effect,” he says. “But it’s cheap for fraudsters to send out millions of these messages (often from abroad), and it can be lucrative to do so, so I don’t think this is going to solve everything.”

Moreover, these rules apply to text messages, but not to fraudulent messages sent over other platforms, such as WhatsApp, he adds. “We’ll need more action in order to fully address this problem.”

To help consumers, the FCC has issued guides on avoiding unwanted spam calls and texts, which include tips such as not picking up on calls from unknown numbers, or hanging up quickly without responding or engaging. For texts, the FCC suggests that you immediately block the sender or report the message as spam to your mobile provider. (Verizon, for example, lets users forward the message to 7726, or SPAM, to block and report the sender.) In general, consumers should be wary about giving out their personal info and phone number, or opting into receiving text messages through commercial web sites.

Furthermore, the FCC advises consumers to write down the number when they receive a spam call, and file a complaint on its website.