Neuroscientists are mapping all 100 billion cells in the human brain

It's kind of like combining millions of Google Street View images to build a view of an entire city. 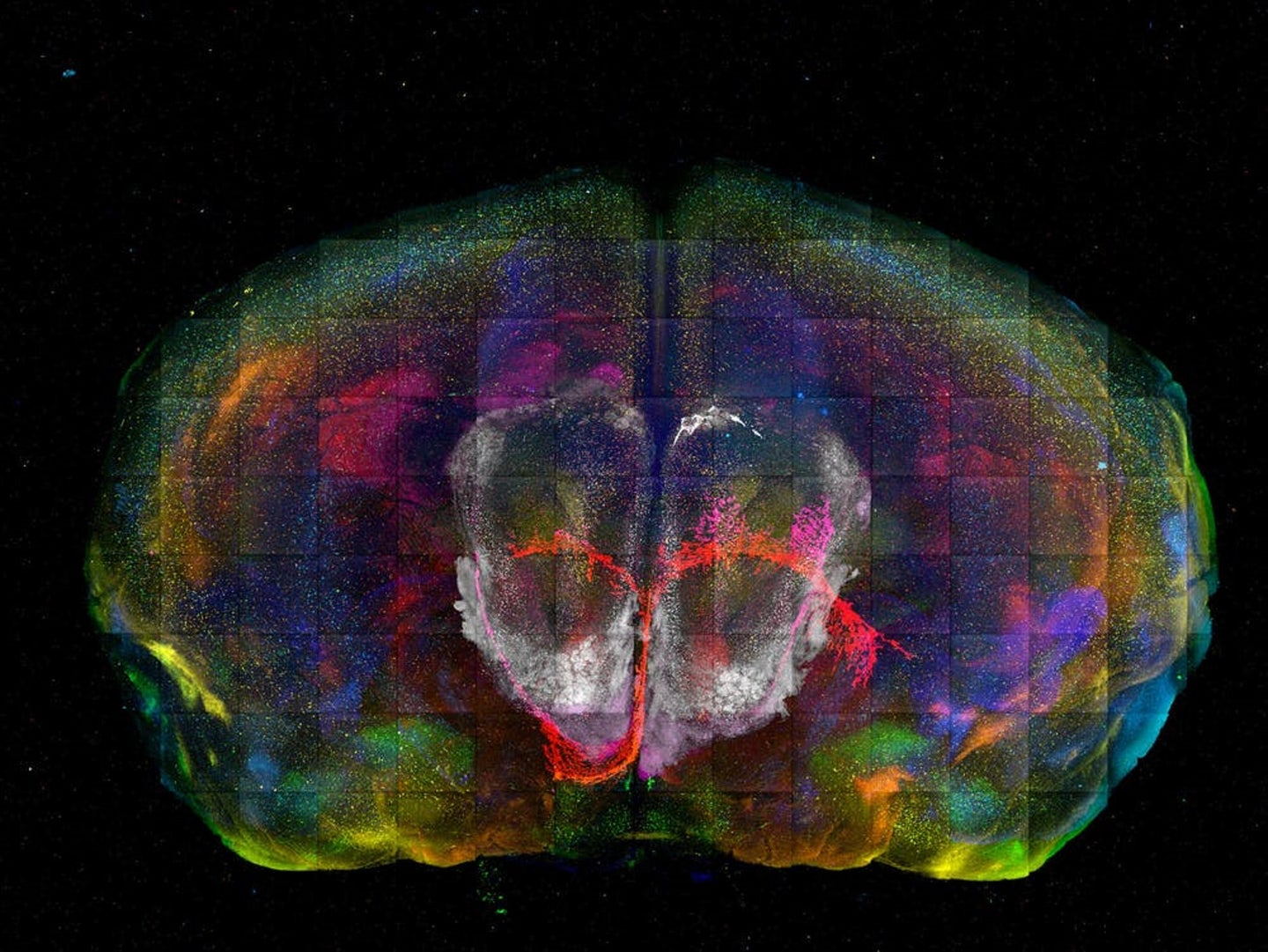 Microscopy tools can stitch together individual image tiles into a photo mosaic of the whole brain. Zooming in on this high-resolution image of a mouse brain reveals rectangular lines where images were stitched together, with each colored dot representing a specific brain cell type. Yongsoo Kim
SHARE

Yongsoo Kim is an associate professor of Neural and Behavioral Sciences, Penn State. This story originally featured on The Conversation.

The brain plays an essential role in how people navigate the world by generating both thought and behavior. Despite being one of the most vital organs of life, it takes up only 2 percent of human body volume. How can something so small perform such complex tasks?

Luckily, modern tools like brain mapping have allowed neuroscientists like me to answer this exact question. By mapping out how all the cell types in the brain are organized and examining how they communicate with one another, neuroscientists can better understand how brains normally work, and what happens when certain cell parts go missing or malfunction.

The history of brain mapping

The task of understanding the inner workings of the brain has fascinated both philosophers and scientists for centuries. Aristotle proposed that the brain is where spirit resides. Leonardo da Vinci drew anatomical depictions of the brain with wax embedding. And Santiago Ramón y Cajal, with his 1906 Nobel Prize-winning work on the cellular structure of the nervous system, made one of the first breakthroughs that led to modern neuroscience as we know it.

Using a new way to visualize individual cells called Golgi staining, a method pioneered by Nobel co-winner Camillo Golgi, and microscopic examination of brain tissue, Cajal established the seminal neuron doctrine. This principle states that neurons, among the main types of brain cells, communicate with one another via the gaps between them called synapses. These findings launched a race to understand the cellular composition of the brain and how brain cells are connected to one another.

Neuroscience has since experienced a rapid explosion of new experimental tools. Jumping forward 100 years to today, modern tools called neurotechniques, which include brain mapping, have given neuroscientists a way to closely inspect every component of the brain. My lab has been utilizing these brain mapping tools to understand what cell types make up the brain and how they contribute to the creation of cognition.

The science of brain mapping

So how does brain mapping work?

Scientists first need to label, or visualize, a specific cell type. The process is like finding a needle in a haystack – it would be a lot easier to find if the needle, or cell type, glowed. This can be done with either genetic or immunostaining methods. The genetic method takes advantage of animals, like mice, that can be genetically engineered so only the target cell type is visible under specific fluorescent lights. Immunostaining methods, on the other hand, render brain samples transparent with a special chemical treatment and use antibodies to label the target cell type with a fluorescent tag.

The next step is to image the whole brain using microscopy techniques that allow scientists to view parts too small for the naked eye to see. Specialized microscopy tools can take snapshots, or tiles, of the entire brain. Stitching these image tiles together can reconstruct an intact 3D volume like a photo mosaic. It’s like building a Google map of the brain: By combining millions of individual street photos, you can zoom in to see each street corner and zoom out to see an entire city.

Unsurprisingly, this type of 3D imaging creates very large datasets. Even though a mouse brain is smaller than a human fingertip, the size of these datasets can easily reach between a few hundred gigabytes to a terabyte. Luckily, remarkable advances in computer equipment and software have made large-scale data analysis possible. Artificial intelligence algorithms in particular have enabled scientists to detect many different cell features in the brain, such as cell shape and size, as well as the processes they undergo.

Once scientists are able to detect their target cell type in an image dataset, the final step is to locate specific cell features in a reference brain. This reference brain serves as a standardized map that shows where each brain region is located. Scientists can then use this map to compare with individual brains and note their variations.

These steps are repeated for each cell type, creating a richer and more complete map of the brain with each run-through.

Working together to build a brain map

Scientists now have the tools to examine the entire brain in very fine detail. There has been considerable effort to coordinate and pool data from brain mapping research labs to create comprehensive brain maps. For example, the U.S. BRAIN Initiative created the BRAIN Initiative Cell Census Network (BICCN) in which my lab participates. Collaborating research groups in the network recently released the most comprehensive map of cell types in the brain’s motor cortex across humans, monkeys, and mice.

But is this enough to understand how the brain works?

Technical advances in cell staining and microscopy helped Santiago Ramón y Cajal make his pivotal discovery about neurons. However, it was his ability to come up with a theory to explain his observations that advanced neuroscientists’ understanding of the brain.

While researchers have been busy collecting incredibly detailed information about the brain, using this data to create new theories about how the brain works lags behind. A map of cells does not necessarily tell researchers how the cells function and interact with one another as a whole. For example, how do these incredibly complex networks of brain cell types work together to generate cognition? Is there a basic unit in the brain that directs how it forms and functions? Answering questions like these will help researchers understand how specific brain changes are linked to different brain disorders like dementia and come up with new strategies to treat them.

It is a very exciting time for neuroscience research. Incredibly rich, high-resolution brain mapping presents a great opportunity for neuroscientists to deeply ponder what this new data says about how the brain works. Though there are still many unknowns about the brain, these new tools and techniques could help bring them to light.