Can I offer you a nice meme in these trying times?

A new study found that COVID-related memes helped people cope with the stresses of living life during the pandemic. 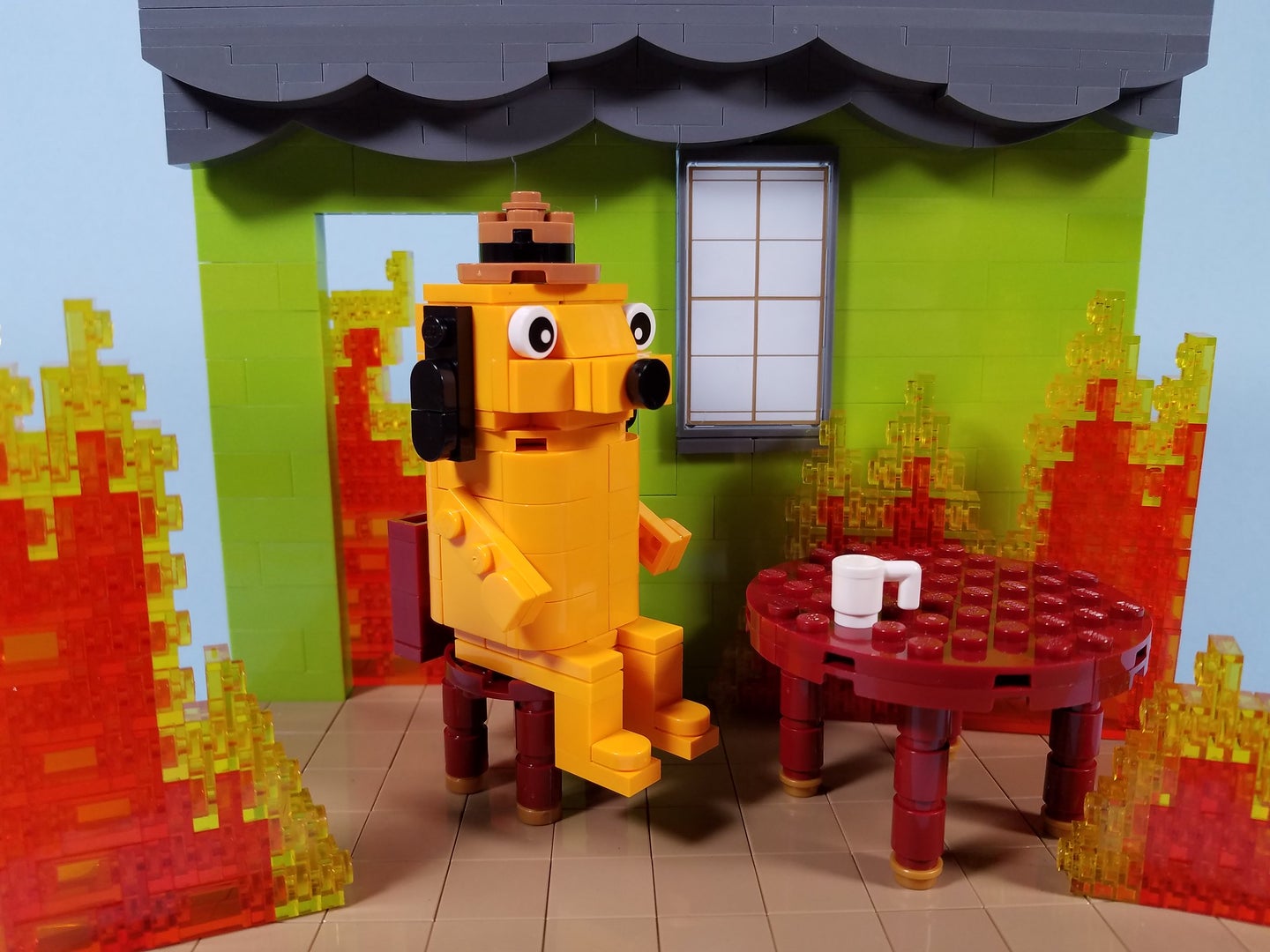 As the pandemic started, Jessica Gall Myrick noticed that the memes on her social media feeds were slowly shifting to follow the public health disaster. “There were more and more memes about COVID-19…and I was talking to my colleagues and they noticed similar trends,” she says.

Myrick, a professor of communications at Pennsylvania State University, started thinking about how memes about this stressful time period were percolating through the internet and our collective consciousness. She and her colleagues set up an experiment to study whether these pandemic memes helped us cope with stress during quarantine—and their results were published in the American Psychology Association journal Psychology of Popular Media this week.

“We found that viewing a meme made people feel good,” Myrick says. “People who viewed the memes about COVID-19 in particular said they were able to handle the stresses of living life during the pandemic.”

Here’s how they tested it

The researchers recruited around 800 participants with IP addresses based in the US through CloudResearch for the main study. Nearly three-quarters of the participants were white, a little more than half were women, and around a third had a college degree. The ages of participants ranged from 18 to 88, with the average age of around 42.

To prepare for the experiment, Myrick and her team scoured the internet and gathered an initial batch of memes. They ran a test with a separate group of participants who rated how funny, cute, realistic, or popular these memes were. Once they narrowed down a smaller pool of generally popular memes that people thought were either cute or funny, they created two versions of each meme. One would have a caption related to COVID-19, and the other would have the same image, but a different caption that was not related to COVID-19.

In the main study, participants first filled out questions about their stress levels and were then either randomly assigned to view a meme from the test pool, or view a non-meme image. The non-meme image was a screenshot of a news headline about advances in car stereo systems. Then in the meme group, about half saw memes related to COVID, and half saw memes that had the same image but a different caption that was unrelated to COVID.

After viewing their respective images, all participants were asked to provide reactions related to what they saw, and answer questions about how well they thought they were coping with COVID and stress.

[Related: The world uses one emoji more than all others. Here’s why.]

Myrick explains that past research has shown that the function of positive emotions is to help us bond with other people and to motivate us. Perhaps the memes allow us to picture ourselves in a similar circumstance, and feel like others can understand what we’re going through.

“It’s important to have the type of media content around you that makes you feel good and helps you connect with other people,” she says. “And it doesn’t have to be a lot.” For example, in this study, they only showed people three memes, and that seemed to provide a little boost.

“That boost can help you then deal with the more stressful information that’s out there, be it about COVID-19 or something you need to do for work or your family,” says Myrick. “That stuff is really important to deal with and engage with. We can’t just avoid all the stressors in our lives.”

Sonya Dal Cin, an associate professor of communication and media at University of Michigan, who was not involved in the study, says that it’s not surprising people would pay more attention and react more to the COVID content. “We’re all living it right now,” she says. “And if you compare the textual content of the meme and non-meme, the COVID-related stuff is probably more relevant to more of the people that they surveyed.”

However, she notes that these results capture a pattern of affects across a group of people. “On average, people who saw these COVID-oriented memes had higher feelings of coping efficacy around COVID—that doesn’t mean that everybody did,” she says. “Some people probably did more than others.”

That’s because these bite-sized pieces of pop culture can have a lot going on. “They’re complicated, they often have a story, and you have a picture and these words,” Dal Cin says. “It’s hard to pinpoint why it works for any given person.”

So, what even is a meme?

Broadly defined, memes are usually a mixed media digital creation (some argue that it’s a form of art) that either references pop culture, elicits an intangible but collective emotion, or offers contextually relevant social commentary for a group of people who share things in common. Memes gain cultural value when users circulate, imitate, and transform them in a way that resonates with others.

[Related: Why everything eventually becomes a crab]

“There is a tendency to think about these artifacts of popular culture as not very meaningful, and yet, the reason that they circulate is because they have meaning,” says Dal Cin. “They have meaning that exist because of a shared cultural understanding that we have with one another.”

Sure, everyone has seen the meme that they don’t get, “but that’s because you don’t have the cultural understanding that that meme is based on,” Dal Cin says. “And that meme is speaking to a particular audience and particular subculture or particular community.” So, if a meme doesn’t work for you, that’s ok—it’s probably meant for someone else.

But almost everyone understands the visuality of memes. “They have a certain structure, a certain visual communication genre to them,” says Dal Cin. “You notice before your eyes even focus on them that that’s a meme.”

[Related: How to make a legendary meme]

For example, one of the memes in the study featured two kittens lying diagonally on a couch avoiding each other with the caption: “when you spent too much quarantine time together.”

“Everyone can go, oh ya I totally get that,” Dal Cin says.

“We’re having the opportunity to laugh about these things we all experience,” she adds. “There’s a lot to dislike at the moment, and finding that point of commiseration that brings us together can be valuable.”

Can memes help us cope with stress and trauma?

Internet memes are now really easy to make, and people can caption it whatever they want. “I think what our data suggests is that it doesn’t have to be all sunshine and flowers all the time to be entertaining or relatable,” Myrick says. “You can use these pieces of pop culture to talk about stressful things.”

A separate study published in February this year found that COVID memes were used in Puerto Rico as a collective coping method in the Spanish-speaking social media. And a study published last year in Scientific Reports found that people experiencing significant depressive symptoms tended to find memes about depression to be funnier and more favorable than people who had reported no depressive symptoms.

“Our findings suggest they may increase positive emotions in some people with depression – even if the content isn’t what most people would think of as positive,” an author of the study wrote in The Conversation. “Depressive memes might be a form of cognitive reappraisal… the way a person changes their interpretation of a certain event or situation that has happened to them.”

The Cut also considered this phenomenon, reporting that “memes have evolved from their broad relatability and humble top/bottom text origins to become absurd, esoteric, and often dark. They’ve been used since around the mid-aughts to convey feelings around mental illness.”

Even before memes took on this new form, there were precursors, such as the tumblr page Screenshots of Despair, which catalogued the loneliness in everyday life.

But experts are divided on whether using humor to cope is actually helpful. “There’s concerns that people may not take it seriously or they won’t pay attention to the risk information because they’re paying attention to the funny part of it,” Dal Cin says. “It’s like a distraction.”

But others argue that they’re beneficial because they draw attention. People want to look at it.

Myrick, who has previously studied people’s consumption of cat videos on the internet, says that research on viral media and what people are actually viewing and interacting with can yield important insights about how we live in the digital age.

“We need more research about how when you place this content in the greater context of someone’s entire social media feed, how does it affect the way you respond to the rest of the media in your feed?” she says. “And if we understand the way we feel or think after using different types of media, then we can be more purposeful when we select what to consume.”