The images undermine the Nigerian Army's claim that it destroyed only 30 homes; in fact, it burned 2,300.

After the Nigerian army went on a hunt for Islamist militants in the town of Baga last month, army officials said they burned 30 houses, the BBC reported. Community leaders, on the other hand, said the army destroyed 2,000 homes.

The U.S.-based group’s analysis is an example of the power of satellite imagery to fact-check claims that might otherwise be difficult to verify. Other organizations have used satellite images, which they can purchase from satellite operators, to track the movement of refugees, bombings and killings in Sudan, and the extent of oil spills.

The conflict in Baga, which occurred April 16 and 17, has drawn unusual attention to the Nigerian military’s actions in its fight against Boko Haram, an insurgent group that wants an Islamic state, the New York Times reported. Military and Baga officials also disagree on the number of people killed in Baga, with the army saying it killed 37 and others saying about 200 people died.

Human Rights Watch and civilians the New York Times interviewed called for an investigation of the army and a stop to its abuses. 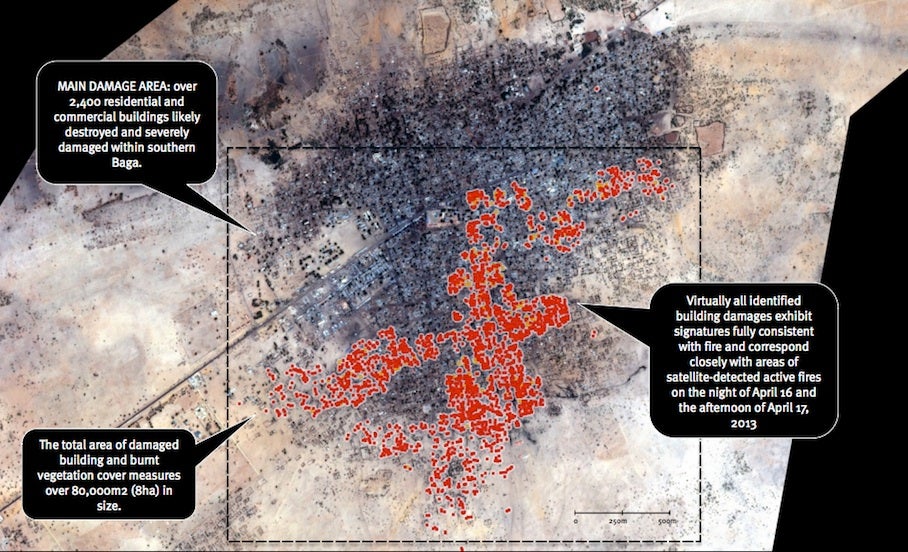