How NASA Could Save Kepler

Scott Hubbard, former director of the NASA Ames Research Center, speculates on how NASA could revive the ailing space telescope. 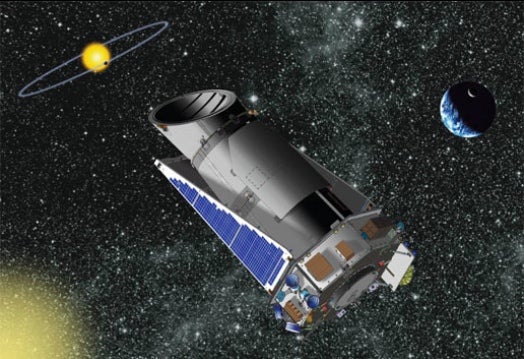 Yesterday NASA officials confirmed that the exoplanet-hunting Kepler space telescope had suffered a mechanical failure, throwing into question the telescope’s ability to continue its mission.

But Kepler is not dead just yet. Speaking to Stanford News Service, consulting professor of aeronautics and astronautics Scott Hubbard–the former director of NASA Ames Research Center who was present during much of Kepler’s construction–says that there are still a couple ways mission handlers might be able to revive Kepler and get its photo-detector array pointed back at the more than 100,000 stars it monitors for signs of orbiting exoplanets.

The problem: Kepler contains four gyroscope-like reaction wheels that spin within the telescope to keep it perfectly steady when observing this huge field of faraway stars. At least three of these wheels must be functioning for Kepler to maintain a steady field of view. One of these wheels failed about a year ago, and now a second has also locked up, causing Kepler to cease operations. On May 12, Kepler entered safe mode, when it realized it was drifting out of position. NASA mission operators woke Kepler up on the 14th and tried to get the newly stuck wheel moving again, but to no avail.

So where to go from here? Hubbard offers a couple of potential solutions:

There are two possible ways to salvage the spacecraft that I’m aware of. One is that they could try turning back on the reaction wheel that they shut off a year ago. It was putting metal on metal, and the friction was interfering with its operation, so you could see if the lubricant that is in there, having sat quietly, has redistributed itself, and maybe it will work.

The other scheme, and this has never been tried, involves using thrusters and the solar pressure exerted on the solar panels to try and act as a third reaction wheel and provide additional pointing stability. I haven’t investigated it, but my impression is that it would require sending a lot more operational commands to the spacecraft.

Even if mission operators can’t get Kepler working again, the telescope survived its planned mission lifetime and leaves behind an 18-month backlog of data in the pipeline that still needs to be analyzed. So sure, this might be the end of Kepler’s active mission, but scientists will be making discoveries based on Kepler for a long time to come.