It pops open at the wave of a hand. 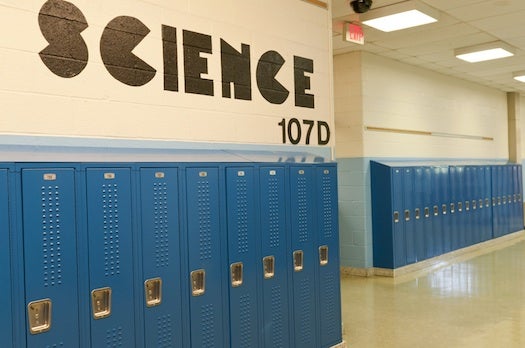 A couple high school seniors in Michigan recently rigged a junior’s locker to open with the wave of a hand, the Livingston Daily reported. It’s not a mean trick: The redesign helps Nick Torrance, a Pinckney Community High School junior who has muscular dystrophy, open and close his own locker.

Torrance has a sensor attached to the right arm of his wheelchair, and he waves his hand over that to work his locker. He likes the opener, he told the Livingston Daily. He otherwise has a fellow student assigned to carry his books, jacket and put things away in his locker.

The idea for the opener came from his occupational therapist, Amy Uphouse, who initially thought you had to be able to buy a locker-opening device somewhere. She couldn’t find one, however, so she asked the school’s robotics teacher, Sean Hickman, if other students could make one. Hickman recruited seniors Micah Stuhldreher and Wyatt Smrcka, who won first place in the SkillsUSA national robotics competition last year and are competing again this year.

Like in any device development, it took a lot of trial and error for Stuhldreher and Smrcka to make something that would work for their target audience. For example, they initially built a locker-opening button, but Torrance wasn’t strong enough to push it, so they replaced it with a sensor.

Torrance didn’t comment much in the Livingston Daily article, nor at all in the accompanying video. He is shy, the newspaper reported. That’s understandable. So the paper talked to his mom, Jean Torrance, too. But did they have to include this line? “He wants to talk to girls; he’s at that age,” the Livingston Daily quotes her as saying about her 18-year-old son. 1) We’re not sure what this has to do with the sensor-activated locker. 2) Mom, that’s such an embarrassing thing to say!