The Video Tech That Helped Find The Boston Bombing Suspects

Software that spots colored cars and hats, and even specific the ages and genders, helps analysts comb through hours of surveillance footage. 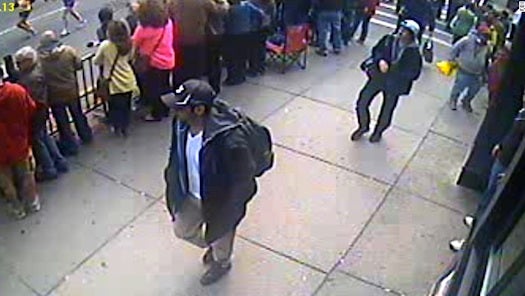 Three days after the Boston Marathon bombings, a security camera caught one of the suspects robbing a 7-11. Law enforcement recognized him from photos and videos released by the FBI yesterday. The identification led police to the manhunt now underway in the suburbs of Boston.

Law enforcement had terabytes of photos and videos related to the Boston Marathon bombing, NPR’s Morning Edition reported, thanks to the increased presence of security cameras. Without computer help, it would take a person years to watch all the footage end to end.

The sleuthing that eventually ID’s the two suspects, believed to be brothers from Chechnya, Russia, likely depended on some newer technology that helps human analysts with the time-consuming job of looking through all that camera footage.

Over the last few years, computer programs have emerged that is able to spot patterns in the same way a human can. The programs pull out only relevant video, leaving people with less to look through. “You can ask for things like, ‘Show me all red cars that went east,'” Al Shipp, chief executive of a video surveillance software company called 3VR, told Morning Edition. Software is also able to look for things such as the black and white hats the suspects wore on the day of the bombing. Given high resolution video, 3VR software is able to identify footage of people of a particular gender and age.

In the future, surveillance cameras may have even greater abilities. One company, BRS Labs, is building a camera system that, after observing a place for some time, “learns” what’s normal behavior for that place, Slate reported in a piece arguing for greater video surveillance. Then the camera can mark times when it sees people behaving unusually, such as loitering, leaving a package and walking away or jumping turnstiles. BRS Labs has signed a contract with the San Francisco public transportation system.

For now, however, it still takes plenty of manpower to catch a suspect from video footage. Automated identification, though a useful aid to speed up a search, doesn’t always work, especially with lower resolution or chaotic footage.

This article originally said Al Shipp’s name was “Alex Shipp.” I apologize for the error.