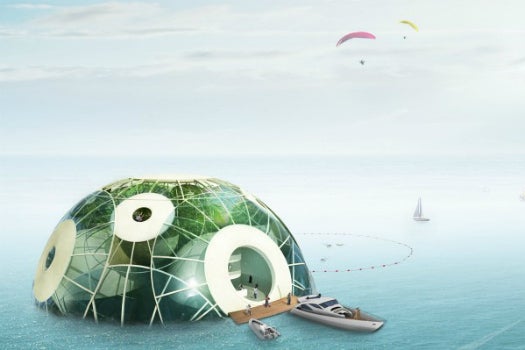 Scientists estimate that the sea level will rise 9 inches or more by 2030, up to more than 6.6 feet by 2100. In anticipation of a far wetter world, French architecture firm Sitbon Architectes designed this pod concept for a habitable, eco-friendly phytoplankton farm in the Indian Ocean.

Phytoplankton are microscopic organisms that form the foundation of the aquatic food chain. They use chlorophyll to turn sunlight into energy, absorb carbon dioxide and produce oxygen like land plants. They can have explosive population growth, known as a bloom, expanding over hundreds of square kilometers in the ocean.

Moored to the ocean floor, the farm, called Bloom, would be a 5-story, partially-submerged center where scientists could live and grow phytoplankton, reducing carbon dioxide in the atmosphere and releasing oxygen. In the process, it could serve as an alert system for rising waters in the event of a tsunami. (Though it doesn’t look like the best place to actually ride out a tsunami, with its many air holes.) 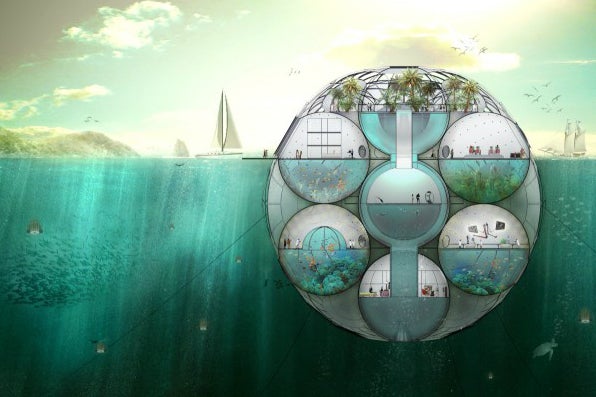 The project was a finalist in Architizer’s 2013 A+ Awards. The firm envisions that “every factory would have its own bloom allowing it to absorb the CO2 that it created.” Plus, it looks like it could involve a lot of fun water sports.