The Navy Sees A Bright Military Future In 3-D Printing

Ready-made spare parts, waste recycling, 3-D printed human ears: the Navy of the future will have it all. 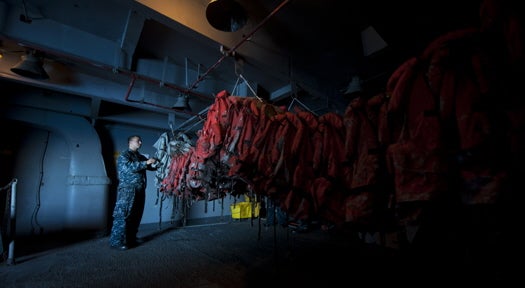 3-D printing is the future of the Navy, say Scott Cheney-Peters and Matthew Hipple in the latest issue of the U.S. Naval Institute’s Proceedings Magazine.

Onboard a ship, the extreme finitude of the space limits everything–time spent at sea, distance the crew can safely travel, amount of rum that can be kept on board to keep the crew happy. The traditional way around this is having a series of naval bases throughout the world, complete with provisions and redundant stockpiles of many specific spare parts. In Star Trek, this problem is mitigated by replicators, which turn already-available atoms into needed items on demand. It turns out that somewhere between reality and science fiction, 3-D printing offers a solution.

Rather than carrying around spares of every needed part, a ship with a 3-D printer on board could make needed replacement parts on demand. This innovation has vast potential to let ships do more with less. But the potential for shipboard 3-D printing doesn’t stop there. The authors go on to discuss printing human tissue, which could literally be a lifesaver, and printers that are able to recycle shipboard waste into new raw materials.

The article notes that as much potential as there is for the Navy and governments as a whole to gain from it, the technology poses real risks. The most fanciful is fear of a hacked 3-D printer creating “a self-destructing weapon or an infiltrating robot,” or introducing “exploitable, unnoticeable design flaws.”

Interestingly too, the Navy is aware of 3-D gun printing efforts, and sees the technology as a relevant and inevitable security threat. “It is not difficult to imagine the attraction of such a capability for some not-so-nice state and non-state actors,” say the authors.