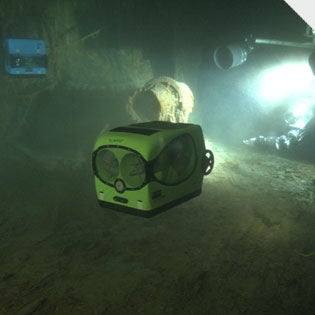 Apparently James Cameron’s Titanic obsession is genetic. His brother Mike’s engineering firm, Dark Matter, custom-built two remotely operated vehicles to probe the Titanic‘s multitude of staterooms, stairwells and cargo spaces. Brother James then used these ROVs to help shoot the 3-D Imax documentary, Ghosts of the Abyss, which opens April 11. We spoke with the brothers about the ROVs, the Titanic and why the Navy is interested in doing business with them.

Popular Science There are plenty of ROVs out there. Why build your own?

James Cameron What we needed didn’t exist. We needed one that had a long enough range to maneuver through the Titanic‘s labyrinthine environment, and that was small enough to do so without disturbing the sediment. In the end, we got it all to work.

Mike Cameron The fundamental problem with conventional ROVs is that they drag their own tether, which immediately gets hung up if they make a turn around some tangled debris. We ended up with a system that paid out its own tiny fiber-optic tether so we wouldn’t have to worry about that.

PS How much could you explore?

JC Over seven or eight dives, we entered about every space that is still enterable: the dining room, the reception room, the stairwells, the first-class staterooms. We even went into the purser’s office and saw the safe.

MC When we launched this little telepresence vehicle it felt like we were actually walking along the deck and strolling through the wreckage. You feel like you are there to the point where you are overcome with the emotion of the place.

PS What’s next for these nimble bots?

JC Subsequent to diving on the Titanic, we used them to image the interior of the Bismarck for a show on the Discovery Channel. We do have some other expeditions in the works, but I can’t tell you what they are just yet.

MC The U.S. Navy is negotiating with us for access to the technology. The ROVs would also be good for commercial applications, like pipeline and nuclear reactor inspection. But their primary function is wreck penetration.