Not to freak you out, but there's a gamma ray-blasting stellar mass pointed in your direction 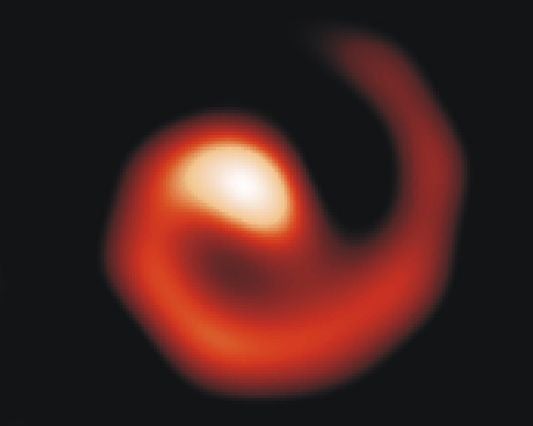 Friends of the Dark Side, your time may soon be at hand. It seems we have a literal death star aiming in our general direction. The culprit is part of a binary star system—two stars which orbit each other—by the name of WR 104. Both are massive and very, very hot. One will eventually explode into a harmless supernova, providing us with a lovely astronomical light show. The other, however, might be deadly.

The evil stellar mass in question is a Wolf Rayet star. When these stars die and the right conditions are met (they must be 30 times more massive than the sun and fast-rotating), they run the risk of collapsing into a spinning black hole, around the axis of which would be powerful jets of high-energy gamma radiation. Turns out, the star meets the criteria. And guess what? Earth is right in its line of fire.

Now, before we get to all the horrible consequences of the Earth being pounded by a tremendous stream of gamma-ray radiation, it’s a good idea to keep in mind that I am omitting a series of events (for simplicity’s sake) which would all need to take place in order to turn this star into a Earth-destroyer. In addition, it is difficult to calculate exactly the angle at which we face the system. We may be very well be far enough off that if the star did explode, the stream would miss us.

All that said, if we were to be hit directly, it might not kill us all immediately! The downside is that’s akin to not being killed by a nuclear blast but being close enough to know you’re in trouble. In addition to the wave of immediate destruction, the rays would wreak havoc on the ozone layer, destroying it by 30-50 percent. So if the gamma radiation didn’t get you, the sun’s radiation would. It would also break up nitrogen molecules in the atmosphere, causing a blanket of smog and acid rain to form and cool the Earth significantly. Needless to say, these are all very bad things.

We have no way of knowing when the WR-104 stars will explode. It could be next week; it could be a hundred thousand years from now. Of all the odds involved, our best is likely that this won’t affect us in the least.